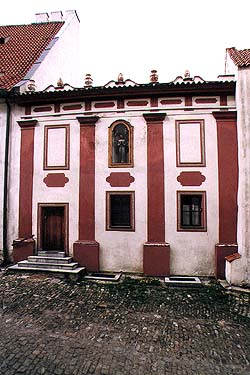 Description of the Building:
This one story building which is situated on the sloping terrain of Horni Street has a front wall that faces Horni Street and a decorated back side which faces the parish Church of St. Vitus. At the top of the smooth front facade there is a Classical attic gable with vases. The back facade of the building is vertically divided by a row of tall, Doric pilasters. In the center section of this facade, at the level of the first floor there is a niche with a statue of the Virgin Mary, enclosed in glass, which dates from the modern day. On both sides of this niche are remnants of stone window jambs. In the interior of the building on the side which faces Horni Street there is a barrel vaulted entrance hall. Next to this hall there is a room with a flat ceiling. Similarly, spaces in the first floor have either flat ceilings or are equipped with joisted ceilings without recesses. There are stone vaulted cellars under the front part of the building and cellars with wooden joisted ceilings are sunken into the slope terrain toward the back of the building.

The latest alterations, which are most evident in the main facade, were made during the Classical period. 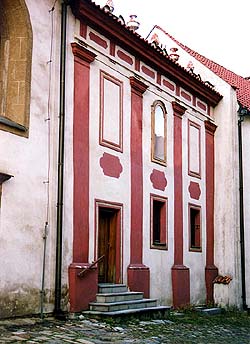 History of the House Residents:
The first known owner of the building was a weaver by the name of Slimar in 1513. Information about the owners and residents of the building in the 16th century is somewhat segmented. It is known for sure, however, that a teacher and fourteen young men, who sang in the church choir during mass and funerals, lived here until another space was set aside for them. Perhaps, at the beginning of the 17th century, a clock maker named Hans Richter lived here. There was a fire in the building in 1652 and after the middle of the 17th century, the building belonged to the town justice of the peace Jan Zikmund Finkenauer, who was succeeded in 1674 by the cobbler Jiri Schulz. He was succeeded in 1691 by the priest Josef Woss. After verger Frantisek Woss, the building was owned by a weaver named Frantisek Erlich from 1743. From 1786-1802, a weaver named Jan Kinnel lived here.