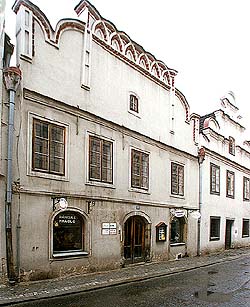 Description of the Building:
This one-story building has got a Classical facade and Renaissance parapetted gable that face Horni Street. The gable is decorated on both sides with small molded arches. The main facade is horizontally divided by cornices. The interior of the ground floor is laid out in three deep sections with Classical, arched vaults. Embedded in the right wall of the central stairwell there is a Gothic, pointed arched portal. The remaining rooms on the ground floor have got flat ceilings, which date to the same period as those that exist on the first floor. A barrel vaulted hallway in the ground floor, which has got a shorter height than the remainder of the vaulting in the building, leads to the courtyard area.

Architectural and Historical Development:
The original building can be dated to the Gothic era. Evidence of this can be seen in the late Gothic layout of the structure, and in the well-preserved walls and portal. Modern-day modifications to the facade date to some time after the year 1860. The most recent alterations were made to the building in the 1970s. 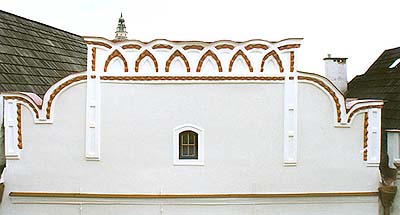 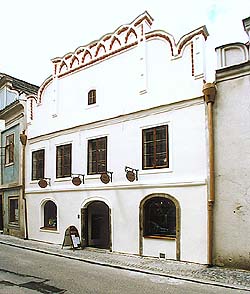 History of the House Residents:
The first documented owner of the building was a tailor named Janek in the beginning of the 16th century. In 1510, the ownership of the building was then taken over by a weaver named Filip and after his death in 1521, the building was purchased by another weaver, Slemar. When Slemar died, his daughter Dorota lived in the building until 1581, when she sold it to Jiri Vackerl.

The next owner of the building was the dean of the school in Krumlov, Urban Suchodem, who sold the building in 1584 to blacksmith, Martin Mukov. Mukov lived here with his wife Anna and their three children and operated a blacksmith´s workshop in this building. Other various craftsmen from the blacksmith guild inhabited this building until the 19th century. The building was occupied by blacksmith Jan Ziehfreund and his family from 1810. The blacksmiths could use the smithery across the street at the Prelature (Horní No. 155), which of course was not always convenient. In the 1620's officers' horses were shoed for free here, which ultimately forced the blacksmith Martin Seidl to tear down the little adjacent facility in 1624, as he was reduced to poverty. The blacksmith was renewed in 1650 by the blacksmith Albrecht Kriegere from Schuttern at Strassburg, whose family lived here until the middle of the 18th century.