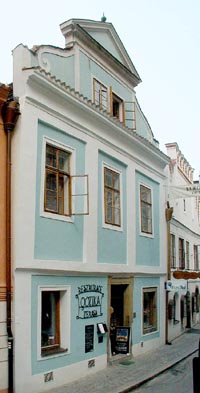 Description of the Building:
This one story building is situated on the sloping Horni Street. The main facade which faces the street is topped off by a decorative, early-Baroque, scrolled gable with a triangular tympanum. The roof of the building is a saddle roof, with a pitch that runs perpendicular to the street. The facade of the building at the level of the first floor is sub-divided vertically by molded piedroits and horizontally by molded cornices. The entrance in to the ground floor interior is marked by a stone portal which is decorated with a molded, receding architrave. The layout of the building is broken up into two asymmetrical sections. On the right side, there is a barrel vaulted hall with staircase. Directly next to the hallway, are the rooms of the back section that contain flat ceilings. The space in the left side of the interior of the building contain predominately pointed, barrel vaults. A Renaissance chamber with barrel vaults remains on the right of side of the mezzanine. The rooms on the first floor have got flat ceilings. The courtyard area of the building is one story high, and has got a terrace extending off of its left side. The cellars in the building are predominately barrel vaulted in stone or brick.

Architectural and Historical Development:
The building originated in the late Gothic period (14th or 15th century). Evidence of this can be found in the layout, the core, and in parts of the well-preserved vaults of the building. Renovations to the building occurred during the Renaissance era. The owner of the building at that time, stone mason Michal Rubik, is to be credited with the work completed during this time. Subsequent alterations were made during the early-Baroque period, in the last quarter of the 17th century. At this time, the main facade of the building received its decorative appearance and the back wing was annexed onto the main building. In 1853, horse stables and stalls for calves were attached to the building and the second story was built on to the first. The terrace was built onto the back wing of the building in 1890. The courtyard was constructed in the modern day. The most recent modifications to the building were made in the 1990s.

History of the House Residents:
This building was designated by the town as a building in which beer was allowed to the brewed. Therefore, this building was used as a brewery. The first documented resident of this building was a burgher named Matyas at the turn of the 16th century. After Matyas, the building was occupied by Jiri Sybmbybar and his wife Dorota. After Jiri´s death in 1526, the building was purchased by a stone mason, Michal Rubik, who was originally from a family of stone masons that came to Krumlov from Haslach, Austria at the end of the 15th century. A gravestone of one of the members of this family is still located to the left of the entrance of the parish Church of St. Vitus. Michal and his family were particularly active in the masonry work that was executed in the town at this time. Michal was later married to Katerina, the widow of a furrier named Krystof, who brought to this new marriage her son, Josta. After Katerina died, Michal sold the building in 1556 to a furrier named Hans Weinling. After Weinling died in 1570, his widow Vorsila remained in the building for a period of time and then sold the building to a Tomas Nuss, who lived in the building until his death in 1615. In 1641 the building belonged to the goldsmith Simon Kohler and from 1650, to Jan Nigrin of Turnstejn. It is alluded to in written documents that, at this time, this building was used as a brewery. A cobbler named Jiri Scholz lived here from the year 1661-1674. In the year 1674 the building was purchased by aristocrat and town councillor Ferdinand Fritschko von Ferstenmuhl. In 1700 Jan Ambroz Putschogl, who worked as a clerk for the town, for the retirement office, for the brewery, and for the tax office, lived here with his wife, children, two journeymen, two servants, and two other residents. It is claimed that this was one of the greatest number of inhabitants to have lived together under one roof in the whole town. In 1712 the building was purchased by baker Jan Schwalb and then, about four years later, by butcher Joseph Riepl. In 1749 a butcher named Ignac Stifter bought the building. He was succeeded in 1772 by another butcher named Mikulas Fripps, whose family handed the building down through the generations (of mostly butchers) until the mid-19th century. The stable and barn for calves was an important part of the building during these years.