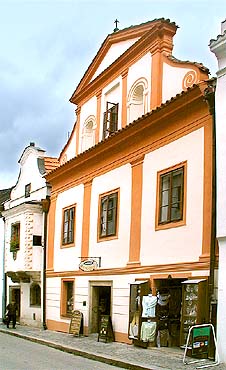 Description of the Building:
This one story building was built on the mild slope of Horni Street. The main facade of the structure which faces Horni Street is topped off by an early -Baroque scrolled gable wall, which is broken up by two small niches that each have a coquillege at the top. Above each of these niches is a triangular tympanum. At the ground floor and first floor levels, the facade is sub-divided vertically by engaged Doric columns and horizontally, between the ground and first floors, by molded stringcourses. On the left side of the interior of the ground floor, there is a hall with segmented barrel vaults, which were additionally subdivided by the construction of separating walls. In the center of the building there are additional vaulted areas. The rooms in the back section of the building have flat ceilings. Though the majority of the ceilings on the first floor are flat, some are coffered in stucco with a square design. On the back side of the building there is a wooden balcony. Extensive, original Gothic, cellar space remains underneath the entire building.

Architectural and Historical Development:
The core of the building is Gothic and the original layout can best be seen in the cellars, where it has remained well-preserved. The back section of the building was annexed on to the original structure and the original layout of the ground floor was remodelled in the Renaissance era. Further alterations, including the construction of the decorative gable, occurred in the early-Baroque period. During Classical renovations, the layouts of the interior on the ground and first floors were reconfigured and the stucco square designs on the ceilings in parts of the interior were created.

History of the House Residents:
The first known resident of the building was a carriageman named Matej in the beginning of the 16th century. Petr the weaver and his wife Dorota were the next owners of the building from 1510. Succeeding them was another weaver named Jan Stubenvoll. After his death, his widow Katerina was remarried to Jan Kyczhaypla and the two lived together until his death. Katherina then sold the building to town clerk Bernard Kozarec. After his death, his widow Magdelena and four children stayed in the building. Magdelena was remarried to an organist named Sebastian in 1578, and they remained in the building until 1581, when it was sold to a cobbler named Jakub Stehauf. Stehauf lived here with his wife and three children until 1599, when the building was purchased by Florian Flanders, who was also known as Pinus. His family lived here until 1639. The baker Valentyn Fischer lived in the building from 1639, and after him, a town miller named Ondrej Schanerle lived here until his death in 1666. Chief administrator of the clergy Gabiel Michal, bought the building from Schanerle´s widow in 1743. It is suggested that the owner of the building in 1767 was the retired town clerk Kristof Fiedler. From 1786, the building belonged to the Neumuller family, whose members include a hat maker and a ribbon maker.

Present Use:
Segeš Exklusive
Rubín
Apartment in Horní Street No. 147