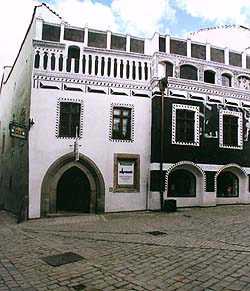 Description of the Building:
This extensive building that measures approximately 20 x 40 meters is bound by three different streets. Each individual tract of the building is situated around the central courtyard area. The facade which faces Panska Street is remarkably decorated with black and white sgrafitto work. The right half of the facade protrudes forward slightly and is marked by two arched windows at the ground floor level. The left half of this facade is marked by a richly molded, Gothic, arched entrance portal and a stone window jamb from the Gothic era. The facade of the building that faces Dlouha Street is marked by a pointed arched entrance portal on the right side of the ground floor level and an ornament of the Rosemberg five-petalled rose in a stone cornice a the level of the first floor. A high parapet runs along the top of this facade and along part of the western facade of Soukenicke Street. Small towers decorate the corner of this parapet. The entrance hall along Panska Street has got basket handle arches. Above this area, the first floor there is an expansive room with rich groin vaulting and remnants of Renaissance and Classical painted murals. On the mezzanine, there is a smaller hallway with cross-ribbed vaults. On the first floor of the tract that runs along Dlouha Street there is a room with a wooden joisted ceiling. All of the other space in this tract are barrel vaulted with lunettes.

Architectural and Historical Development:
This building, which is one of the most remarkable buildings in all of Cesky Krumlov, exists today in its present day size and appearance as a result of an annexation of two individual buildings that each created from several earlier buildings that originally stood on this lot. The larger of these two is marked by the early-Renaissance parapet along the top of the facade. This building is an original Gothic structure that was adjoined with an adjacent structure in the Renaissance period.

Development of facade:
The building was probably built to the second-floor level in the early Middle Ages phase. On the basis of the fragment 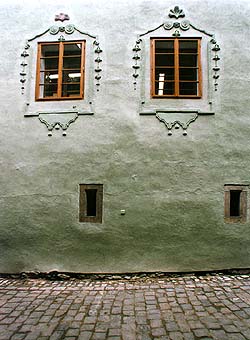 discoveries we can assume that the corners were framed by the black rustic-work with a white line all over the area. In the earlier Middle Ages phase it was very expensively rebuilt, the form can be seen today. The facades were finished by the attic gable with the blind battlement and corner turrets. A large number of stone window jambs and a new portal were fixed, and a rich decoration of tectonic elements was done. In the late Renaissance period the facade was articulated with a red-coloured lizen scheme. In the Baroque period a grey-and-white-coloured scheme appeared as well as the earlier developing phase with a purple-coloured lizen articulation.In the Classicism period the facade restoration was done, as it can be seen at present. The window holes were framed by the band shams with ears, tassels, volutes and shell shapes, window ledges, decorated with shabracks, with the use of the white-and-grey-coloured articulation. The rustic-work was applied in the ground floor. Since the half of 19th century only some corrections have been done with the use of a few coats of paint all over the surface.The last uncovered coat of paint was green-coloured with the particular application of the ochre-coloured hue.In 1997-98 there was the restoration of the facade and interiors, tha facade was applied with the light green-coloured paint.The facades were covered with the unfit silicate paint which was interconnected with the older coats of paint (more careful method was applied onto the north facade).

History of the House Residents:
The first documented owner of the building was a tanner named Wassl. At the end of the 15th century, chief magistrate Matyas Jezisek lived here and in 1510 Ambroz Jezisek, who apparently borrowed his surname from his predecessor, was the owner of this building. Ambroz was the son of a man known as Mikulas of the Square, who lived in building no. 9 and the brother of Vorsila Certova, who lived in 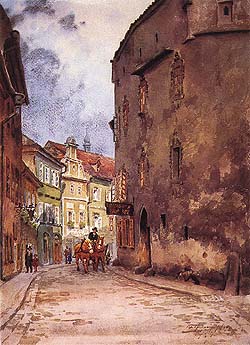 Svornosti Square no. 1 (the present day town hall). When Ambroz Jezisek died without a will, his brother-in-law, Ondrej Cert, was responsible for dividing the inheritance. In 1524, Ambroz´s father sold the building to Mikulas Ambroz of Hostejna, who was a clerk in the mining office of the Rosemberg family. One year later a metalurgist, Honza Nemec lived here for a short time. He was replaced, before 1530 by Jan Froschauer who worked for the Rosemberg´s as a clerk, later a secretary, a chamberlain, and also as a mining clerk. In the late 1540s-early 1550s, the building was owned by the brothers Balthasar and Kaspar Froschauer. In 1554 Kaspar bought his brother´s share of the property and remained in the building as the solitary owner. In 1563 Kaspas Froschauer traded this building for Rosemberg clerk Adam Stralar´s building Latran no. 20. When Adam Stralar died in 1569, the building fell into the hands of Wilhelm von Rosenberg. At the end of the 1570s and the beginning of the 1580s, the Rosemberg liege lord rented the building out to his own regent, Jakub Krčin z Jelčan, who possibly lived here in 1584. After Krcin, a painter named Bartoloměj Beránek-Jelínek lived here for a short time. In 1593 Peter Wok von Rosenberg sold the building to his tax clerk Ambroz Strup, who then sold the building in 1597 to his own brother Mikulas. Ambroz Strup was married in 1593 to Anna, the daughter of Hans Naisser, the sheriff of Netolice. After her death, he married Anna, the daughter the Cesky Krumlov pharmacist Jan Kunsteter. Ambroz Strup died in 1601. In 1603, his widow Anna married Jan Cyprian of Libos, who was the son of Thomas Netolick. In 1606 Jan Lupeglauer bought the building and then sold it in 1608 to Matej Dekar and his new wife Zuzana. In 1654, the owner of the building was Kaspar Munzer, who used the building to brew and serve beer. The building then changed hands several times Various owners include a fish businessman Frantisek Neruth in 1775-1796 and later a paper maker named Jan Jiri Pachner. It is suggested that this building, which was sold with all of its brewery dishes in 1606 for 1,150 three-scores of groschen was of the most expensive buildings in Krumlov.

Legends:
A long hallway used to run from the cellars of this building all the way out to the river. This hallway was walled up in 1947.