Vyšší Brod and an origin of Czechoslovakia

The news that on October 28 1918 was called out an independent Czechoslovakian state, arrived to Vyšší Brod on the next day. After day-long tension called Germans for an evening a meeting into hotel Panský dům, in which they did not let Czechs. Behind a chairman table sat German deputy Dr. Wichtl from Vienna, chief of regional office Schöbel from Kaplice and abbot of monastery Pammer. At this meeting was arranged that Vyšší Brod shall be connected to "Deutsch - Österreich". 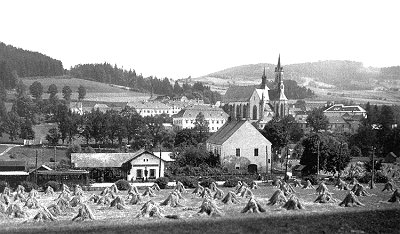 On the next day, October 30 1918, offices run started to administrate only in German. Post was hold in train station in Kaplice, occupied by units of Volkswehr, which interrupted any contact with Czech outback. On the same day came to Vyšší Brod hundred men of Volkswehr. They created (combined with demobilized German soldiers) an armed military unit, which seized area along the rail Certlov (today Rybník) and Lipno. German deputy Dr. Wichtl in has Wien created "District of Šumava", which occupied the whole regions Č. Krumlov, Prachatice and was reaching up to Domažlice. Chief of regional office Schöbel collected around Kaplice more than 700 members of Volkswehr, armed with 600 rifles, 16 machineguns, 10 pistols and 75000 cartridges. German employees promised to abbot Pammera a loyalty to Deutsch - Österreich.

In beginning of November 1918 decided the police in České Budějovice to carry out an intervention against Volkswehr in Kaplice, led in along the road Kaplice train station - Kaplice city. Three companies with four guns led by Ságner and the fourth company directed by Urban were supposed to outflank and detain the volatilizing Volkswehr near to village Suchdol nad Certlovem. Officer Ságner succeeded to outpost the whole unit of Volkswehru away from Kaplice, but Urban's group due to lack of ammunition did not stop volatilizing Volkswehr.

On the same day arrived train of engineers Emil Frič, Josef Eliáš, Václav Janda and Urban's company to Vyšší Brod. They met a resistance at the city council, where met town deputies and mayor Johann Schmidke. City council refused to order to inhabitants that all weapons must be returned immediately. Mayor Schmidke did so only after an energy intervention of officer Urban. Meanwhile the Czechoslovakian soldiers were accommodated in hotel Panský dům, although the officer Urban wanted on the same day occupy Lipno and Frymburk. His effort had been prevented by 14 deputies of municipalities above Vyšší Brod, who promised faithfulness to Czechoslovakia. Only a guard was left in Vyšší Brod and a transport train left on the next day to Horní Dvořiště, where the soldiers occupied train station and surrounding municipalities.

After a military company left into the area came for a couple of days seeming peace. In these days was in Vyšší Brod again created a volkswehr, which left again to Certlov on November 7 1918 when gunfire could be heard from Kaplice. They spotted here a long train decorated with Czechoslovakian tricolor staying in train station. Volkswehr then returned back to Vyšší Brod a and knots of Austrian soldiers were going back to Austria.

During the same day met in city hall the city deputies and council to stormy action. Mayor Schmidt invited to this assembly just one Czech Vojtěch Sladký and asked him to lead the deputies of town to the Czechoslovakian soldiery occupying rail from Certlov. Vojtěch Sladký agreed and mayor sent him a message that city deputies settled on protection of town. In noon invited mayor Mr. Sladký into his flat. He asked him: "What would you do if you were a mayor?" Sladký answered that he would do anything to secure the town. And so the delegation left at three o'clock afternoon from Vyšší Brod led by Vojtěch Sladký to Certlov and declared there that town won't resist and it will disarm and dissolve its Volkswehr.