Historian Aleš Stejskal after search in Třeboň archive indicates that there were more than 560 pubs in South Bohemia during the rule of the last Rožmberks. On average there was one pub for 10 to 15 houses. In Vyšší Brod stood in this time 74 houses and 11 pubs. Right to brew beer had both the town and brewery in monastery. Pubs used to be located mainly in town square and house, where the beer was being sold was decorated by straw wisp above its gate. The taproom used to be a simple room with earthen floor equipped with two or three tables with footrest and wooden benches. Walls were bedecked by great number of pots, tankards, pints and mainly mugs. Beer had been brought from cellar in tinny kettles and cooled in taproom in wooden barrels filled with cold water or ice. It was measured with tinny mugs. 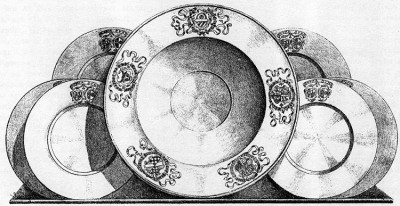 The closing hour was mostly set by "beginning of night guard's errand", so at 23.00 o'clock, but independently working widows were closing with a sundown. The taprooms had been opened "after work", sometimes even from early morning. Although was the owner of a house kept in records as a pub tender, beer was usually tapping his wife. Pub tender was ending every visit of the "neighbours" by lighting out. He took a lantern and "lighted the guest out" in front of his house. Visitors of pubs were "drinkers". Another sort was formed by people out of town. Women accompanied by man or men could were invited to join the company in pub. Very popular were profligate women - merhyně.

In 1608 published abbot Paulus Fahrenschon "Articles and rules of town Vyšší Brod". There are 63 points, eight of which concerning the pubs in Vyšší Brod. In article No. 8 is written: "When someone gets caught using the wrong kettle, he shall be fined". What meant to pay 128 pennies, navvy received 6 pennies a week mason master 16. To it is connected article No. 55: "Magistrate, aldermen and those bound to the city service must every Sunday inspect correct serving". Pub tenders were even then cheating. Magistrate Simon Malschinger and his aldermen often went out to "inspect a nail". In every pub had to be one officially approved mug, which could use every guest to test his beer serving was correct. To the mug was attached a nail marking the correct serving. In case that this mug response to rules, "they pierced a hole in it", what meant taking away a license. Another kind of cheating was mixing water to beer. But pub tenders were adding to it also "plonk, thin and light beer". The punishments were financial and after their repetition the license could be taken away for life.

Article No. 16 concerns the o visitors out of town: "Every pub tender must inspect what kind of guests he's got, he shall not provide accommodation to strangers longer than three days without permission from the magistrate, otherwise he pays for this guests one white penny. In case this guest cannot pay he must leave a deposit". Guests were eating from one platter together with pub tender family and after dish they paid "as they liked to a plate". For a night was guest placed where the place was. Mostly in taproom on table or bench. Manners of "drinkers" were set by articles : 18, 20, 50 and 53. The first three state that everyone entering the pub wearing any weapon must handle it to pub tender for safekeeping. And no pub tender could allow guests to play dice nor cards and he could not let people to sit in taproom over night. Public footman could take away dice or cards from the taproom. Otherwise had the pub tender to pay 64 pennies and 320 pennies if he withheld the fight. During the drinking evening no trades, exchanges nor bargains could be made. The last article forbade selling of beer and spirit on Sundays and other holidays. Breaking of this order was fined with 128 pennies. Victory of pub over a church recorded a vicar Matthäus Fock, who wrote: "More people came to pub than to church".