History of the Paper Mill in Větřní

The hand production of paper already existed in the region of Český Krumlov in 1614. The production plant was rented out to different tenants and in the year 1766 was sold to Jiří Pachner. The biggest changes and the beginning of the greatest expansion in the manufacture of paper was connected to the arrival of a trader by the name of Ignác Spiro from Jindřichův Hradec in Český Krumlov. In 1861 he purchased the old paper mill from Theodor Pachner, a knight from Eggensdorf, and then followed with an investment of thirty thousand gold coins for the purchase of machinery and other necessary equipment. The change from the old hand made production into mechanical production of paper increased greatly the production. On the October 23, 1866 a great fire in the factory nearly burnt it to the ground. Because Spiro had his share insured, he obtained new means, and was able to return the paper mill into operation within one year.

At that time the cultural and economical growth of the town required an increase in the use of paper. His manufacture, which at that time was carried out only from old rags, was not sufficient and the search for a new raw material began. The most useful was saw dust. For this reason, in 1867 Ignác Spiro bought from Jan Wolfl for fifty thousand gold coins Pečkovský mill, which was situated near the road from Český Krumlov to Rožmberk. This mill, which during that period was used for grinding wheat, was turned into process of wood grinding. The mill had an advantageous position, not very far from Český Krumlov, with good transport connections and a sufficient labour force in the nearby village of Větřní. Because of this Spiro gradually moved his Krumlov paper mill here, because there was not any possibility of expansion. 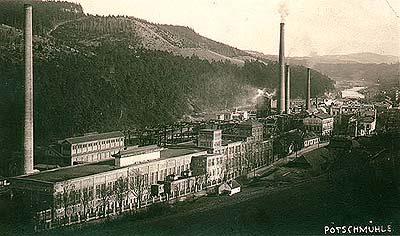 Later on Ignác Spiro took on as business partners his two sons, Ludvík and Emanuel. During the economical crisis in 1873, only the strongest financial businessmen survived. A number of companies during that time crashed, but Spiro's paper mills, thanks to careful investment, prospered. The paper products were of good quality and were exported far abroad, even to the United States of America. 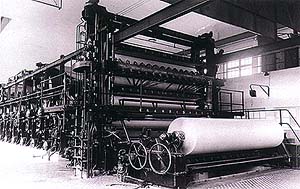 The method of grinding wood into pulp was a slow process, and so in 1883 the area of the old Pečkovský mill, was turned into a sulphite pulp mill. It was one of the first sulphite pulp mills, it was set up two years earlier than the first of its kind in America. The transport facilities slowly became inadequate. All the produce had to be transported to the railway station in Velešín, which was costly and slow. Because of this in 1896 the company built its own railway siding, from the factory to the railway station in Kájov. During 1889, the wood preparation area and the machines for paper productions were ruined by a great fire. The insurance company again reimbursed a greater part of the losses, so again it was possible to purchase new machinery abroad, and by this, greatly modernise and expand the factory. The original water power was soon supplemented by steam power, which was continually expanding. A big brake came in with the availability of energy power from the commissioning of the hydroelectric power plant near Vyšší Brod in 1903 (Power Station in Vyšší Brod). A new working era in the region of paper manufacturing started in 1911, by the building of the biggest rotary machine in the world to date.

During the first world war it was shown how much the Austro-Hungarian Empire was hurt by its dependence on northern caustic cellulose. The Spiros took this situation into account and immediately started to organise the production of this raw material at their factory. Several events prevailed this licensed plan in 1917 to build the production plant for caustic cellulose and it could only materialise in the year 1926. Again it was the first factory of this kind in the Republic, and Spiro's plant became very famous, totally self sufficient and was not relying on supply from abroad. 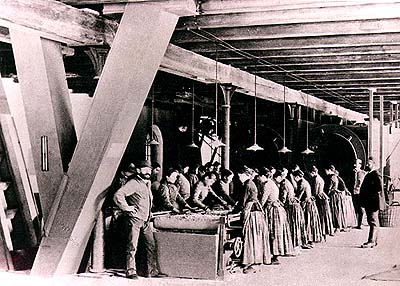 In September 1929 the private company changed into a share-holding company, with the share capital of sixty million Czech crowns. After the economical crisis in the thirties of the twentieth century, the factory was again modernised. Both the manufacturing machines and other mechanical parts of the process were rebuilt and changed. A high pressure steam boiler and a back-pressure turbine were built, 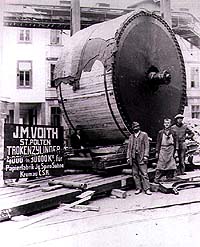 which solved the problem of not having sufficient amount of energy power during low water pumped from the Vltava river, especially during some dry summer months. Before the second world war, the factory used altogether seven paper making machines, with a width of 1.80 up to 4.20 meters, which during 24 hours produced up to twenty wagons of paper. The company participated in the total Czechoslovakian paper export by approximately 47%.

The fateful year 1938 deeply affected the history of the factory. Within the framework of anti Jewish measures, Germans took over the properties of the Spiro family in September 1941, and the amalgamation with a less prosperous Austrian paper mill, Steyrermühl in Steyer, took place. During the period of occupation, the war economy prevailed. Also this period brought neither any expansion to the production nor its modernisation. The machines were not looked after and therefore the equipment was quickly ruined, and at the end of the war it came to a complete standstill. 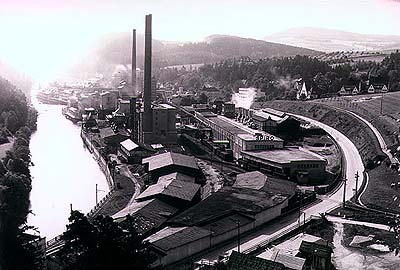 Information about present production of the paper mills:
Jihočeské papírny, a. s., Větřní