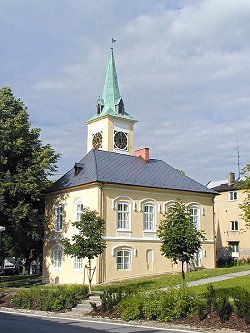 The very first teacher in Vyšší Brod known by name was "rector" Nikolaus. He was teaching in his house, which stood in a middle row in upper part of town square. Report about him comes from year 1530. Professor Schmidt documents that school in Vyšší Brod existed "much sooner". School was called elementary and townsmen boys learned here to read, write, sing and vicar taught them the catechism. The house of teacher Nikolaus burnt down together with other houses during the great fire on April 8th 1569. After this fire moved the school into a house located near to a new presbytery of St. Bartoloměj's church. In second half of the 16th Century teachers Matthias Haider and Matthaus Brock worked here.

The articles of town Vyšší Brod from year 1608 concern also about the school: "Townsmen must ensure that their children are attending school regularly and that they are studying. Children shall not run freely. It should be fined by 128 pennies". The school year started on November 3rd and ended on 20th September. Teaching took two hours forenoon and two hours afternoon. On Thursday was "ferial day", when the school was closed. There were three weeks off during Christmas, four during the Shrovetide and two during Easter. The pupils prayed before both forenoon and afternoon classes in the church, that is why the school was so close to it.

On February 27th 1623, in the middle of the Thirty year war, married the teacher Laurenz Stutius Marie, daughter of miller Johann. By this wedding became Stutius a townsman and municipal scribe. Combination of functions of teacher and scribe has became from than a rule, in 1634 was added the function of an organist, carried till this time by family Zepfels. The first teacher, scribe and organist was Adam Reichard. Though the social status of teacher was the same as one of public shepherd. That is why the teachers collected from parents special fees. In the beginning of school year it were the introitales, in a term the pretiales, during the fair the jarmarkales, and so on for every religious holiday. For sharpening of writing plume the teachers took the pennales, for sharpening of candle for winter the kandedales. Children were sitting in school on the ground and in winter every student had to bring a wood for heating in a school stove. 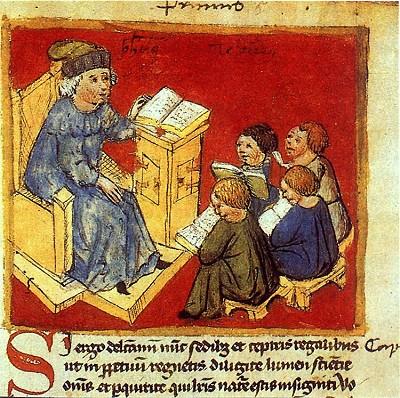 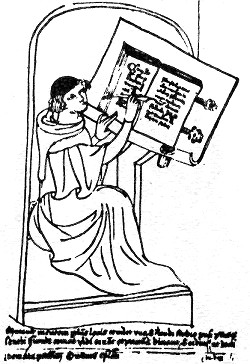 In 1643 during function of an abbot Georg Schroff, expanded the parochial church of St. Bartoloměj and the school building had to be pulled down. The new house was built nearby the rectory. This house got in year 1722 the number 43. It had been bought from "locksmith Hans Hartmann and expanded for uses of school. For three decades (1651 - 1681) had been teaching here the superior teacher Simon Leitgeb. The function of the preceptor (subordinate teacher) is mentioned here for the first time. The preceptor supervised a work of pupils and corrected their mistakes. The school building was not touched by larger reconstruction till December 7th 1774, when the General school rule was published. This document meant the beginning of an obligatory school attendance, which has been invoked since 1775.

After Simon Leigeb another teachers are mentioned: Petr Paul Eismann, Martin Hölzer, Andreas Hofbauer and Jakob Malik. The last one was Czech and spoke very bad German. He had been recalled by a city council in 1747, to his position was put Andreas Hofbauer, who was a waiter and that is why Malik finally remained in his function. He was changed in 1774 by Anton Hall, student of the reformer of Austrian education system Kindermann from Kaplice. At the end of the elementary school in Vyšší Brod was a wage of superior teacher one hundred of golden coins a year, what was just on the edge of poverty. The respectable life of teacher's family was secured by 130 golden coins a year.