A Walk through the park in Frymburk 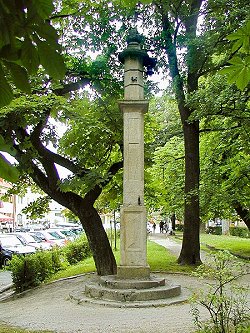 Since the 13th century the main square in Frymburk was on the merchant trail so it was a market square until the first world war. When Karel Sechter was the mayor in 1853 he arranged that the man-made stream which ran through the main square was paved with stone plates and it was bordered with chesnut alley on both sides. The legend says that this ditch (more then 2 km long) was diged up by convict to death and then he was set free for this praisworthy work. The stream which was used for rinsing linen on the main square and for feedeng the town fountain is from the end of 16th or from the begining of 17th century. This stream led water from the other stream today known as Podhorský straight into the towm and the market square. This Podhorský stream floats from extincted settlement Podhoří around Svatonina Lhota to todays Frymburk's bay. During the construction of houses on the main square around 1950 the man-made stream was discontinued and todays running water come through polyethylen pipes from spring at the tow called "pod Martou".

The park on the frymburk main square was founded in 1884 and as we are going to show there are not just trees, bushes, paths and benches there. The greatest mystery is around the fountain. There is a date 1676 carved in on east side of the fountain and there is a five petaled Rožmberk rose as well. But the last of Rožmberk died in 1611 and in 1600 he presented Frymburk and all domain to his nephew Jan Zrýnský. In 1676 Frymburk belonged to Buquoy family, which claimed it's suzerainty here until the abatement of vassalage in 1848. The fountain was moved as well in 1853. It's original place was on the other side of the stream. The reason why it was moved to a different place is a mystery. It is known that the fountain was used as a decoration in film Stříbrný vítr.

There is a mighty more then 5 meters high pillory from 1651 way above the fountain. These were very popular at that time after 30 years war. They were used to expose wrong-doers and their "decorations" were telling why they are on pillory. For example waspish women used to have muzzle on their heads and unfaithfull women used to have straw wreath there. The Frymburk's pillory is up today decorated with little bell. Antonín Cechner oversaw this bell while he was making the Inventory of historical monuments. This inventory reminded me to look for five skulls carved in the pillory. These five skulls probably symbolized convicted to death. But the Rožmberk's headman's book mentioned Frymburk only three times. The pillory was forbiden during the reign of the emperor Josef II. 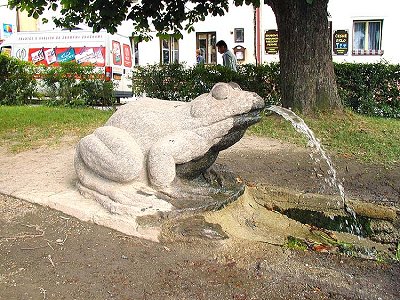 There is a Marian collum way down from the fountain. This collum was established in 1635 by Vyšší Brod cistercian monk Jan František Latich. He built it in front of his brother's house who was a frymburk burgess Gregor Latich. The monk gave him even 30 gold coins so he and his family took care of this collum forever. The collum then could protect all Frymburk citizens against plague and wars. It was established during the 30 years war. It is clear because there is a latin chronogram on the south part of the collum. But in most turist guides you will find the date 1735. This mystake was probably done in 19th century when someone transcribed the latin chronogram badly and later authors used this mystake.

Bellow the Marian collum there was memorial with life-sized bronze statue of the emperor Josef II. instaled on 14th of August 1904. But this 13 tons heavy bronze statue stayed there just until 1919. Then it admonish of three centuries of reign of Habsburgs in Bohemia so it was destroyed. They have found diferent way how to use the dado. The bronze relief of A. Stifter with a piece of poem about Frymburk written on it replaced the emperor. After the second world war even this relief of poet destroyed probably because this poet from Šumava who lived in 19th century used to write in german about country where he lived. The empty dado then served for board with symbol of Československá republika with date 9.5.1945. There is no Československo today and the end of the second world war is celebrated on 8th of May. 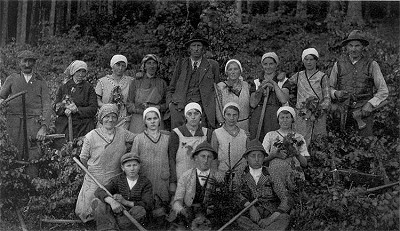 At the begining of 20th century the Frymburk native and director of Wienna industrial school Jordan Kajetan Markus erected a memorial to Adalbert Stifter. Place for this memorial was in the lower part of the park. Šumava rocks and bronze relief of Adalbert Stifter served as a base for memorial and they were designed by Hans Rathauský in 1902. Hans Rathauský is the author of this poet memorial in Linz and relief in Horní Planá. After translation of relief of A. Stifter on the dado of the emperor's memorial, this place was used for bronze relief of Jahn Thurnvater the man who organised corps of volunteers against Napoleon armies in this region. After 1946 the stone memorial stayed empty. Then the relief of A. Stifter was found in frymburk fire-brigade's house so it was moved back to it's original place.

There is a small goblin made of stone standing in the park not far away from the memorial of A. Stifter. This goblin is watching the whole park day and night. One night vandals kicked his head off.Academical sculptor Pavel Malovaný restored the goblin in 1995. The whole park was decorated and accomplished under goblin's supervision. There is a new decoration there since the Frymburk celebrations in 2001. There is a new fountain in the shape of frog in the upper part of the park. The frog is about one tone heavy and almost one meter high and it is spouting the water straight into the watering canal." It is very unussual frog. It is not sitting on the stream as we are used to but it is leading the stream straight into the towm from hill Marta", the Frymburk mayor Oto Řezáč says. They had to pay about 70 000 CZK from the town budget for the frog.