Heuraffl is the first documented title of today's Přední Výtoň and in German is this title used up to the present day. Different authors write about arrival of hermits into Heuraffl already in the year 1357. Then begun the intensive colonization of the right shore of Vltava river, what is documented in the urbary from the year 1379, where's for the first time in writing commemorated majority of settlements on territory of today's Přední Výtoň. Professor Augustin Sedláček writes: "The Rožmberks established several cloisters at their manors, two in Krumlov and third for hermits of St. Pavel in the desert of Vítkův Hrádek near Frymburk at Výtoň (Heuraffel) is called.." notice expression "in the desert of Vítkův Hrádek", what means in desolated part of this manor. The German historian of Přední Výtoň Oswald Sonnberger writes about desolated land too.

The German title "heuraffl" entails in translation "log in wood". Hermit's order of St. Pavel lived quite unpretentious life in absolute separation from the rest of the world. At all events in the year 1384 established Jan and Petr of Rožmberk "in forests below Frymburk six cells and chapel for hermits of St. Pavel, which place was called Heuraffl, and gave to it six-score from reeve and duty of town Frymburk". The encyclopedia of Czech cloisters refinements: "Brothers Petr and Jan of Rožmberk presented in the year 1384 to the Eremites a chapel of St. Pavel and six cells, located in far place in Šumava deep forest. The donation confirmed in the year 1389 the Prague archbishop Jan of Jenštejn". 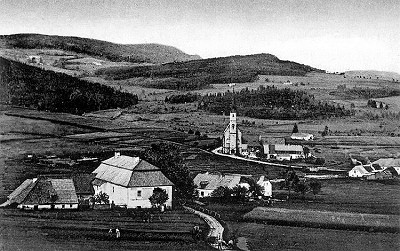 The Eremite order arose in the year 1250 by mergence of two older groups of Hungarian hermits. In Bohemia were rising the separate hermitages and hermit's settlements, accepting the heritage of the first eremites, already in the time before the Hussites. The most considerable hermitage was at that time in Přední Výtoň or Hejrov. The order dress of eremites was vestment (dress, which goes down to ankles) from white cloth, škalpulíř (strip of fabric, which is worn over a vestment) with cingulum (rope, which tightens a vestment) and a cape (head-dress) of the same color. No every eremite adhered the requierement of beard. The symbol of eremites were two lions, resting the forepaws at palm, at what sits a crow. The seat of order was cloister of St. Vavřinec near Budín and order progressed upstream Danube river and from this river it probably came to Heuraffl. This order joined not only hermit-monks (cierici monachi), but also the lay brothers. When we come back to a meaning "cell", it was a living part determined for one hermit. Six cells then means, that here lived six hermits - monk-eremites. In a book Heuraffl im Bohmerwald stands that: "Petr II. of Rožmberk was a provost of holy chapel at the Prague castle and died on 16. November 1384. His brother Jan cared for welfare of small hermitage, which was located in his forests, at heart". 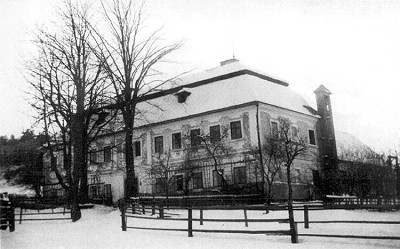 The hermites from Heuraffl became very soon known, what proves the donation of Humpolec townsmen Hasek and Jakub from the year 1385. Yearly interest of six-score of Prague raps were supposed to be paid by Frymburk´s reeve: "in two same refunds to the nearby living hermites". This contract was certified by Jan of Rožmberk on 8. June 1385. Jan of Rožmberk on 11. August confirmed his last will, and as he died on 1. September 1389, this will took an effect. Hermites from Heuraffl obtained according to the will: "lands, on which stood the settlements of hermites including surrounding clearings and interest of eighteen-score of Prague raps, paid from coffers of castle Rožmberk on festivals of St. Galussa and St. Georg. Money was passed to the prior Hodyko, or to his successor with recommendation of Frymburk´s rector". From the will of Jan of Rožmberk is clear, that in the year 1389 was superior of hermites in Heuraffl prior Hodyko, which died in the year 1416. Prague archbishop Jan of Jenštejn on 29. September 1389 confirmed the continuation of hermitage in Jeurafflu and adds it to Czech, then Prague archdiocese. This confirmation was probably made due to proximity of Premonstrates in Austrian cloister Schlagl, which had its parsonages near Frymburk and Rychnůvek. Premonstrates and eremites litigated because of the question of indulgences. Probably in years 1423 till 1425, when Hussite troops went through region and burnt out near-by Austrian Haslach, "their wild hordes in Heuraffl partly manslaughtered and partly drove out the hermites". It's written in eremites parish chronicle in Frymburk.