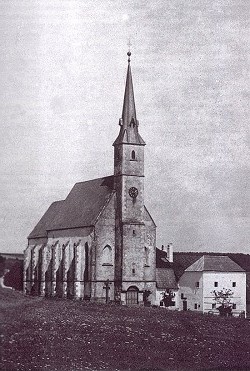 In the Executioner's book of the lords of Rožmberk is from the year 1423 an entry, that Martin from Tupadl "confesses after torture, that he used to go with Žižka, seized towns and castles and ate meet on Fridays. He used to be on roads near Frymburk". It is then possible, that one of those, who in Heuraffl (Přední Výtoň) partly manslaughtered and partly drove out the hermits was also Martin from Tupadl. Let's return to Frymburk's chronicle, which continues: "After this rough time was the settlement again renewed by other brothers according to Paul the colonizer and was then settled by Paul's friars". In the year 1474 comes into Heuraffl another group of hermits, led by Petr Fáber from Lower-Austrian Pochlarm. This Petr Fáber was the superior of order of begging hermits, who belonged to the Pavlán's. They were called the Order of the smallest brothers (Ordo Minimorum). This order was confirmed in the year 1474 by the pope Sixtus IV. and so the Pavláns were in Přední Výtoň ones of the first.

In contradistinction to eremites wore the Pavláns black vestment with great cape, which is called the chaperon. Vestment was corded by a black cingulum with five knots. In sign they had a golden inscription Charitas on blue field, inclosed by radii. A difference among two orders of monk-hermits was that the Pavláns could not eat not only meet, but also any food from animals(for example eggs or milk). With the support of Czech king and the Rožmberks managed Petr Fáber in Rome that pope Innocenc VIII. on 27. February 1491confirmed both hermitages in Přední Výtoň therewith, that each shall follow its rules. Hermitage of the Pavláns was located on glades, northwards from today's church, so its members made wish, to build their cells near the eremites and to live under the same guidance. The pope agreed with this wish too. Pope Innocenc VIII. ordered on 13. April 1491 to arcidiakon Alexander from Bechyně to visit both orders of hermits in Přední Výtoň. 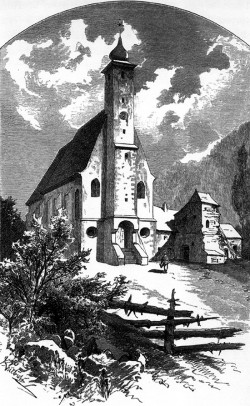 At that time there was supposed to be build the new common hermitage with common dormitory (domiciliation of hermits) and community church shall have a belfry with bell. Both hermit's orders shall live together, but each of them according to its rules. For construction of the new hermit's church and cloister issued the pope Innocenc VIII. two extraordinary indulgences to everyone, who visits Heuraffl and contributes for construction of temple and cloister. About four years later, on 29. April 1495, a visitor Alexander found out and confirmed, that both orders live only under the eremites' rules. Conferment of the extraordinary papal indulgences made of Heuraffl a pilgrimage place and enabled to hermits to start with construction of church and contiguous cloister. Construction went on relatively quickly, so on 3. and 4. May 1523 was church and cloister consecrated by the bishop Bernard from Pasov. Church was dedicated to the Holy Trinity and St. Antonín.

About a wealth of the hermits in Přední Výtoň proves the fact, that brothers Petr IV. and Oldřich III. of Rožmberk certify in one document, that the hermits from Heuraffl gave them a gilded silver pot, 299 Hungarian quidens, 100 pounds of six-rap coins, hundred raps and 84 pounds of Bohemian raps. Since the year 1519 they have been getting yearly eight tubs of carps from Třeboň and tithes from corn in Jasánky and Dolní Maršlák. In the year 1520 their benefit grew by the interest "from meadow located in the forest below Vítkův Hrádek". Krumlov's widow Uršula Haluzna gave money to build a vineyard and Viennese citizen Vitus Polinger wanted to present them a vineyard. Sometimes around the year 1527 the hermits in Přední Výtoň obtained more houses and lands in Austria, but in those times the flood of pilgrims and money began dropping. Last major gifts were from pilgrimage in the year 1528 and since then the gifts from the Rožmberk only distanced the failure of hermit's order. 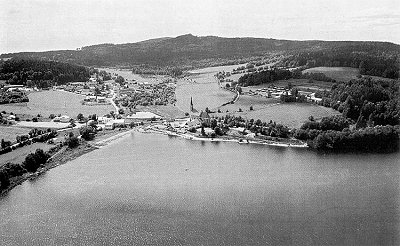 The last recorded death in the Necrologue from Přední Výtoň is the one of monk Pavel from the year 1556. On the eighth August 1597 Petr Vok of Rožmberk entailed to Cistercian cloister in Vyšší Brod the revenue of the hermit cloister in Vyšší Brod. Due to this act, Vyšší Brod abbot Michael Fabritius on 23. November 1597 obliged, that he will not during the life of Petr Vok of Rožmberk build at monasterial territory any new brewery, mill nor pond. From document of Petr Vok of Rožmberk we learn, that Vyšší Brod Cistercian monastery has been managing from the year 1548 hermit's cloister in Přední Výtoň and Peter Vok passed them all present gifts to hermits. It was mainly the Frymburk toll and tithes not only from Austrian Haslach, but also from other villages of his manor in Czech and Austria. In the year 1613 The new owner of manor Jan Jiří of Švamberk let for church in Přední Výtoň paint a picture of Holy of three kings.