The necropolis of the Rožmberk family in Vyšší Brod monastery 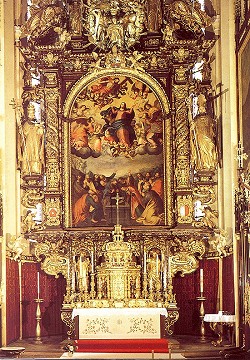 We have to start with quotation from the beginning of 20th century: "We gladly unbend with a look on beautiful painting of modern origin done by Hellich which is like a compensation for original wall painting of the church. This wall painting is hardly seen today. Who knows how long would we stay in front of this legendary scene if the kind guide would not draw our attention to the underground crypt which supposed to be(according to the legend) underneath the presbytery. This underground place is covered with a veil of mystery because noone have entered it for more then 400 years. The guide is telling us legends about underground cells where benefactors of the Rožmberk family are dreaming forever, begining with Vok the founder of the monastery untilPetr Vok. When the last masculine member of the Rožmberk family Petr Vok was commited to the grave in the Marian church there was place made just for him so noone else could be placed there. The family of Rožmberk, the glorious family who lasted for more then 400 years died out. The only two monks who were at the funeral died almost immediately after ceremony taking their secret with them into the grave. Since that time no mortal have ever entered and disturbed these Lords of the Rose in their mysterial and damp crypt. There are many other legends adherent to dead bodies of Lords of the Rose. The chronicler Bohuslav Balbín is telling a story he heard once from the monk of Vyšší Brod monastery. The dead bodies of these Lords are not in their coffins but they are sitting in chairs like rulers in round."

There is a lot of literature studying problems with location, size and content of the crypt of Lords of the Rose inVyšší Brod cistercian monastery.The greatest minus of this literature is uncritical receiving of rumours with romantical toutch. The Balbín's mysterial information about funerals of Rožmberk's in chairs is preserved up today.The work of M. Hlinomaz and J.Kolda is a good summary of all sources. They are answering questions of M. Millauer which he have asked in 1819: Where is the crypt placed and which members of the Rožmberk family are buried there. The handwritings of the monastery archivist and librarian S. Kühweg who gave number of funerals held in the monastery church were very helpful.

The location of the crypt underneath of the presbytery of the monastery church is first mentioned in quotation of the third funeral.The firts two funerals of Vok I. from 1262 and Vítek IV. who died on 22nd of September (the year of his death is unknow) are mentioned without noticing the place of burial. I think that by this time the Rožmberk crypt was not finished yet.The funeral ceremony of Eliška (Alžběta) of Rožmberk from Dobruška, wife of Jindřich I., who died on 22nd of January 1307 is the third funeral mentioned .She was buried into the new family crypt.It was a great tradition in the Middle Ages for noble families to establish their own crypts (tombs) in churches of monasteries they have founded. The founder of the monastery knew that building the monastery will give him safety for his soul. The family necropolis was supposed to be lasting monument of the Glory and a symbol of it's continuity and antiquity. Rožmberks were the most significat rulers in Bohemia when they have founded the Vyšší Brod monastery so from the begining this monastery was taken as a family necropolis.Ten generations of funerals of members of this powerfull family started with funeral of Vok I. of Rožmberk in 1262 (he died on 3th of June 1262)in monastery church. Between 1262 and 1612 they were 37 members of the Rožmberk family buried there and other 3 members of the Krumlov branch as well. Together 23 men and 17 women.The placing of the crypt is responding to medieval wiev of resurrection and it is related with desire to be buried as close to the centre of redemption as possible and that is the main altar.

After the burial of the last member of the Rožmberk family Petr Vok - the crypt was locked up. The Březan's chronicle says that there was place just for the body of Petr Vok. Periodical "Zápisník" (26/1968) is saying in detailes a fiction about Petr Vok stipulating in the last will that after his death noone is allowed to enter the crypt.This prohibition was to prevent exposing the act of theft because Petr Vok picked all valuables of his ancestors from the crypt. During the research of last will of Petr Vok they could not find anything written about this prohibition. There was noone else who was supposed to enter the crypt and it was natural for the monastery to keep in peace former authority. Wide building activity connected with re-paving of chapter hall and most of the church aisle around 1880 did not provoke unfolding the entrance of the crypt.They said they were looking for it but it was not efective enough. It is very strange on the Plan of Funerals in the monastery church from 1784 that the whole presbytery and the left part of space in front of the cross-gridion are empty without marked funerals. So there is a possibility that this space was set apart as a necropolis of the founders - the Rožmberks.

In 1902 the main altar dropped for few degrees and on 3rd of December 1902 the sounding excavation was made. After roughly 1 meter of digging they hit wault and under the wault there was a crypt about 5 x 3 meters long and 1,5 meters high. Inside the crypt 2 tin coffins were found one of them belonged to Petr Vok. Other space was filled with disarranged rotten wooden coffins. The openning to put in coffins was cluttered up with the great stone. The crypt was closed down immediately because it could collaps. It was a great surprise and regret together for discoverers when they found the real extend of the crypt. This is evident in the official report in regular newspaper. Noone was satisfied with discovery in 1902 so many other attempts to penetrate the crypt of the Rožmberk family in the monastery were made.

The Třeboň archivist Václav Hadač describes how he went down the crypt with abbot Bruno Pammer and few skilled workmen before the first world war began. After 1945 it is rumoured that the entrance to the crypt is right under the abbot's chair in presbytery on the evangelic part. Millauer says that abbot Teuschman and older friars believe the entrance of the crypt is right on the place where novices kneel before the mess - on the left side of the entrance to the chancel. Even monastery necrology tells us the placing of the crypt. It says that all funerals were held in the chancel. There is another fiction - nacists used the crypt as a cache for their treasure. Docent A. Friedl mentioned there were some attempts to open the crypt in 1962 and 1963. But the only real penetration of the crypt was in 3. 12. 1902 according to original written sources.