The Manual of Joan Staicz in Vyšší Brod monasterial library 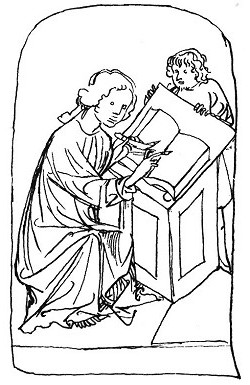 The core of documents, which were preserved in manual of Joan Staicz, and which forges the oldest Czech urbary, arose at the end of seventies of 13th century. Majority of them emanates (according to donation records) from the year 1278, the rest is from a period between years 1259 and 1278. There are meaningful three papal documents from 31. March 1278, which provide a peep into the inner situation of cloister and its economic position. In the first paper confirms the pope Mikuláš III. to Vyšší Brod monastery all liberties. With the exception of foundation record published by Prague bishop Jan III. the documents came altogether from Vok of Rožmberk. In the second paper the pope directed Prague bishop Jan III. of Dražice, to safeguard houses and lands of cloister against evil-doers. At last in the third paper granted the pope to Vyšší Brod obtaining of pawned houses and lands. It was evidently an attempt of cloister to emancipate by the help of papal leafs from narrowest dependence on the Vítkovci tribe.

The oldest Czech urbary is an inner registration setout, which registered a real extent of monasterial estates. Beside the single locations is stated their area and dues of eggs and cheese, which shall be delivered from every field. The field was a piece of land, which size was determined either by time needed to cultivate it, or according to volume of a sowing rate. As the central unit was supposed to become, but it did not, the royal field of area 45 to 50 hectares. Prague field had had about 18 hectares, peasant field perhaps 23 hectares and priestly, or also monasterial field, meted 25,6 hectares. Whether there are in this oldest urbary recorded the monasterial fields nobody knows, but is it likely.

Town Vyšší Brod (forum) had had at that time 16 fields and paid to Vyšší Brod monastery yearly 520 eggs and 16 cheeses. Near Ruckendorf (today's Hrudkov, which belongs to Vyšší Brod) it was ten fields, 200 eggs and 10 cheeses. Next there is introduced Jan´s mill, Horní and Dolní Přísahov, Lachovice, Horní and Dolní Drkolná, Rejty and Kapličky. If we divide number of delivered eggs and cheeses by fields, we get always a tax of 20 eggs and one cheese from a field. Mentioned data about natural dues can be interpreted as reduced form of stock from newly settled villages, which were not founded by cloister. At the time of a rise of urbary, they were "na lhotě", then freed from paying the cash benefits, so they could evolve. From character of locations tenanted by Vyšší Brod cloister it is possible to say, that role of a new cloister wasn't in village merging "on a green turf", but in reclaimation of newly settled country under direct sight of foundating Vítkovci tribe.

There is for the first time mentioned settlement "Capella", then Kapličky in urbary. From matter, that locations and their total field areas are not nominally stated, it is possible say, that their cultivation was round the year 1278 only in initial phase of realization. It corresponds with a fact, that number of eggs and cheeses, as far as it was not a mistake of typists, is 780:60, which is not a ratio 20:1 ascertained between these produces from the other locations around cloister. From an etymology title "Capella" results, that founder of a chapel as a center of future settlement could be most probably Vok of Rožmberk. Regarding the soil value and rugged woody country it is very hard to imagine, that monasterial subjects could deliver greater natural dues. Relation to villages round České Budějovic, which around the year 1290 belonged after an execution of Záviš of Falkenštejn to Vyšší Brod cloister, solved by a compromise the document from king Václav II. from 3. July 1292. Natural dues from area of České Budějovice received the Vyšší Brod cloister from Záboří, Plav, Boršov and Heřmaň, which was at that time known as Lhotka. According to manual of Joan Staicz, especially from urbary, it is possible to talk rather about enclave of monasterial estates inside the Rožmberks dominion.