They are divided by the River Vltava. As it is often traded they were built at the same time in the middle of the 14th century. The legend about them was printed in magazine Budivoj at the end of the 19th century. Two Rožmberks were said to be in love with a noblewoman. While one of them was on the crusade, the second one courted to the noblewoman for a long time and finally they got married. As soon as his brother had come back from the crusade, he got to know about the wedding and was very angry. When they met near Loučovice, they drew their swords and started to fight. Suddenly, during the fight they heard the voice coming from the Heaven: "You are brothers, become reconciled. "Both of them trembled, were ashamed of what they had done and claspped in their arms. To prove their reconciliation, each of them made a decision to build a church on one river-side of the River Vltava. Those churches were dedicated to their patrons - St. Prokop and St. Theobald. 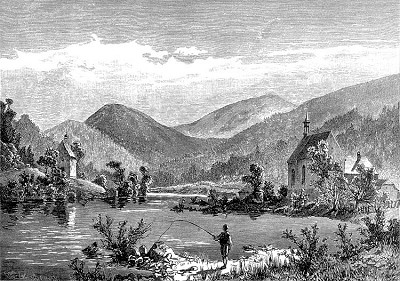 However, the reality was completely diffrent. In 1220 Vítek of Prčice called on rector Bohuslav of Zátoň in order to give him an advise how to settle the landscape. The rectory in Zátoň belonged to the Sázava monastery. Rector Bohuslav was given a chapel in Frymburk and Drahuň Forest for his advise and service by Vítek. The forest still belonged to the rectory in the 20th century. The area of Drahuň Forest on the left Vltava river-side is called "Čertovy proudy" (the Devils´ Streams). Father Pisher built a wooden church or most-likely a chapel of St. Prokop in order to keep the devils chained. There are other two evidences about the church of St. Prokop in the Benedictian monastery. Around the year 1250 there is a reference to the establishment of St. Prokop´s chapel in Zátoň on the River Vltava (today´s Loučovice). Until May 1305 it belonged to the Frymburk rectory. That day Henry of Rožmberk transfered the Frymburk rectory to Austria Premonstratensians in Schlägl but the forest and church are kept by the Benedictians. The evidence about the chapel of St. Prokop in Drahuň Forest was written by Pope Klement V on 13 December 1310.

In 1259 the new Cistercian monastery in Vyšší Brod was given the gift by The House of Vítkovci. Above all it was the monastery forest which was defined by the right Vltava river-site and provincial frontier mentioned in the deed of gifts. Even after 100 years there is a desolate landscape and hardly pervaded forest. Only a few monastery coal merchants settled down on the top which is now called "Uhlířský" (Coalmen´s). The nearest permanent settlement in the monastery forest was on the old provincial path in Kapličky. The nearest settlement of Dvorečná, used to called Twarožná, was on the left Vltava river-site of the Rožmberk mansion. 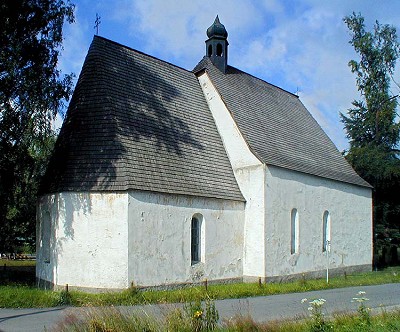 On 31 October 1361 Prague Bishop Peter of Krbov consecrated the church of St. Theobald, originally wooden, at present known as the church of St. Oldřich only a few meters far away from the chapel of St. Prokop. At the same time he also consecrated its surroundings as the place of the new settletment. St. Theobald is the patron of coalmerchants, so it is possible that it should have been the permanent settlement of coalmerchants. On 16 November 1361 the new church was given the indulgences limited only to the visit. The first house in its nearness was built in 1450. It was the monastery fish-monger´s. While the fish-monger´s was being built, the church had already been in very bad condition. Therefore it was replaced with a stone building. It was finally completed in the year 1489 and given the indulgences by several Roman Cardinals. The church is called after St. Theobald but at the same time it was consecrated to St. Oldřich - the patron of fishermen.