The capitular hall in monastery in Vyšší Brod

The monasterial complex in Vyšší Brod together with contiguous buildings isn't part of compact building operations. From written news arises a picture of gradual and prolonged construction of the complex of buildings. The oldest part is probably the sacristy, which is located in Eastern wing of convention between church and capitular hall. Its construction, how J. Čechura found out, had originally had two floors, as chapel of Guardian angel in Zlatá Koruna. In original condition remained only the ground floor, which now serves as sacristy of church. It originally was an independent chapel. It was probably an abbatial chapel, which was used (before the Eastern part was finished) by the whole convention. Regarding to its location it is possible that it served as an amarium, which used to be placed in grey-monk cloisters in this way.

Functionally most considerable and at the same time architecturally most valuable space is the capitular hall, placed beside southern side of sacristy. Space of capitular hall played at life of Vyšší Brod cloister an important task. Everyday were the monks meeting here, here were read the order rules and the abbots were being elected here. Abbot was sitting at the eastern side opposite to entrance surrounded by members of convention according to their ranks. Light is coming inwards the capitular hall from East through three windows. Central window is circular with rich circle painting, and it replicates rosette windows out of French cathedral-Gothic of classical period. Compared to proportions of capitular hall is the rosette in Vyšší Brod large and it covers a substantial part of wall. That is why it is impressive. Location of circular window in the eastern wall of capitular hall interrelates with fact, that in front of it was seat of the abbot.

It is obvious, that creator of the capitular hall knew the style of Northern-French Gothic. It is full of architectural and decorative ideas. During period, when the monastery in Vyšší Brod was founded and when grew up its original buildings, begun into Czech countries coming the responses of northern-French Gothic, which were represented by naturalistic decorating, window tracery, and by creating of higher levels of structural compositions. Roots of style of the oldest part of cloister in Vyšší Brod were sought in art of Hessen, which dramatically assimilated stimuli from the northern-French Gothic. 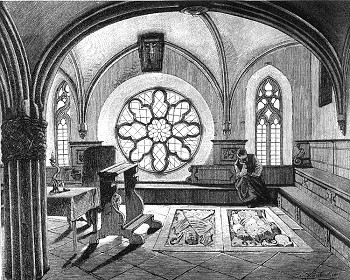 The capitular hall in Vyšší Brod is probably the most important to historical development of Czech architecture because of its vault system. Here are presented the expressive diminutive and metamorphoses of forms, stylistic shift is here clearly notable. Remarkable is especially the fragility, gentleness and subtility of all parts. This the most highly distinguishes this architecture from older buildings, for which were symptomatic plastic and robust parts. Space of the capitular hall in its total touches by wide-branched impression. It is done by its centrality, as well as by not too high vaults.

Vyšší Brod capitular hall is full of the architectural and decorative ideas. Its extremely creative calculation and rich molding bring to this place the architecture of courtly character. Whole space of capitular hall is penetrated by icon-graphic programme, which probably is an expression of a deeper ideological intent. The vault consols with vegetable and zoo-morphic motifs could perhaps be an illusion of paradise filled with flora, animals and birds. Components of this world are also the lamb heads on the central pillar, inpersonating probably Christians and Christian community. Central pillar, in its upper part is "covered" by leafage hewn into stone, deputizes evidently the life tree. The important role can have here the circular rosette, which used to be in icon-graphic programs of cathedrals a symbol of solar reel. This world is inferior to the God's will, icon-graphical expressed by motifs at vault bolts. Consecratory arm protuberant out of cloud is an illusion of God Father, relief of lamb at the second bolt is then symbol of God Son. The ideological base of the icon-graphical program in this building was probably the medieval image of cosmos.