The Way of the Cross in Vyšší Brod

The legend "The resting Our Lady and her son" refers to a granite stone on the small glade about one-hour journey far-away from the Vyšší Brod Cistercian monastery. In 1844 an unknown clerk and his twelve years old son hang a picture of the Holy Virgin Mary there. In May 1887 seven little shepherds built a provisional chapel above the stone and decorated it with the holy pictures. The information about the chapel above the stone spread very qiuckly so a wooden crucifix and larger picture were fastened there in a very short time. In the half of August 1887 Abbot Leopold Wackarž of Vyšší Brod visited the chapel and decided to build a pilgrimage church.

The church was designed by Engineer František Karel who was building a paper mill in Loučovice at that time. Landlord Franz Preinfalkl donated a building plot, some one else granted the wood, bricks and conveyances. Bricklayer foreman Josef Dobusch built the pilgrimage church in the Pseudoromanesque - style. On 29 July 1888 a crucifix and bell were already consecrated. On 15 August 1888 Abbot Leopold Wackarz of Vyšší Brod consecrated the pilgrimage chapel called Maria Rast am Stein (Our Lady resting on the stone). More than two thousand pilgrims attended the ceremony. In the following year 1889 on 15 August there was a gala procession and since then 15 August has been the important pilfrimage day.

In 1890 the original chapel above the stone was replaced by a new one. The statue of the Virgin Mary Sněžná at the life-size was purchased from firm Stufleser in St. Ulrich, Tyrol. It is placed on the stone where used to be a picture by an old master representing St. Sebastian´s martyr death. The chapel and statue consecration was proceeded again on 15 August. The procession set out from the Vyšší Brod parish church of St. Bartholomew which is situated in the upper part of the Vyšší Brod square. 276 girls dressed in white led the procession and carried the flowers and statue of the Virgin Mary Sněžná. More than two thousand parishers of Vyšší Brod followed them. 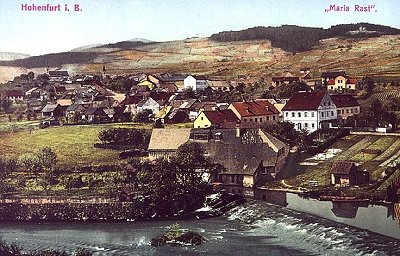 In the year 1890 the Way of the Cross with 14 stone stations was built along the way leading from the upper part of the Vyšší Brod square to the pilgrimage place. The stone stations are filled with the cast iron pictures and God´s grave on the top. The Way of the Cross leading to Maria Rast am Stein was consecrated on 27 March 1898. There used to be Alex Peckla´s inn, where monastery beer was on the tap, under the chapel and church. Three religious processions are regularly held to Maria Rast am Stein every year. In the past the banner was carried in the front of the procession by the brotherhood "Živý růženec" (Live Rosary) of Vyšší Brod. On Sunday 29 July 1900 the procession of 540 worshippers from the town of České Budějovice was led by Father Beller to the Vyšší Brod monastery. The mass of thanks was celebrated there and 243 pilgrims took the Eucharist. Then the pilgrims went along the Way of the Cross to the pilgrimage church of Maria Rast am Stein. The girls carried the palm leaves, banner and statue of the Virgin Mary. On 5 May 1901 there was the biggest pilgrimage and 91 years old Abbot Leopold Wackarz led a procession of Vyšší Brod residents. As written by D. Kaidl: The beginning of the procession already passed the church of St. Joseph´s while the last man was leaving the monastery gate. More than three thousand pilgrims attended the procession on 15 August 1901. It was Abbot Leopold Wackarz´s last Way of the Cross leading to Maria Rast am Stein. He died on 13 December 1901 at the age of 92.

Further information:
History of the Vyšší Brod Region
Places of Pilgrimage in the Český Krumlov Region
The chapel and the Way of the Cross Studenec
Stations of the Cross in Frymburk
Vyšší Brod