The chapel and the Way of the Cross Studenec

The locality of Studenec near Rožmberk nad Vltavou is called after a well with miraculous water. Originally there used to be an old beech with a picture of the Virgin Mary expressing the patient´s thanks after they had bathed in and drunk the miraculous water which healed them. The name originates from the name of a nearby farm Horndlehzbrunn which is sometimes mentioned as Hernnlesbrunn or Herrleshof. The legend says that the horns grew on a local innkeeper daughter´s head and she could not get rid of them. She washed her head in the miraculuos water several times and the horns fell off her head. The place was also called "Our kind Lady well" or "Green Mary" because the Virgin Mary heard the resident´s prayers during the drought and gave them the rainfall.

The Cistercian Father Severin Gottschmid wrote: "It is demonstrable that pilgrims have been going there since 1609". In 1670 after the 30-year war the rector of Rožmberk Filip Halbritter called on the worshippers of his rectory to donate the gifts in order to build a chapel. Countess Magdareta von Buquoy and the Mayor of Rožmberk G. Franz Jägerdorf were among the donors during the year 1670 and 1671. They raised 132 golds and other donations such as building material. There was a supported document issued in 1679 proving that it is allowed to celebrate masses in the newly built chapel. The chapel was given the name of St. Anna. On 8 May 1688 the Prague archbishop consistory issued an interdict - the prohibition to celebrate masses in that chapel. After eight years , on 2 November 1696, the interdict was abolished.

More than one hundred years the chapel was used as the pilgrimage and religious place with the healing miraculous water well by visitors and pilgrims from Bohemia and Austria. Since the 18th century it has been named as the chapel of the Virgin Mary in the typology. Emperor Josef II closed the chapel but in 1793 masses were celebrated there again. There also were wedding ceremonies in the chapel as it is recorded in the Rožmberk marriage register. Obviously the first wedding ceremony was performed on 6 July 1760 when farmer Johann Tomaschko of Český Jílovec married to Rosina Tuscher of Přířez. During the years the chapel was dilapidated and in 1841 the semi-ruined chapel had to be restored properly. 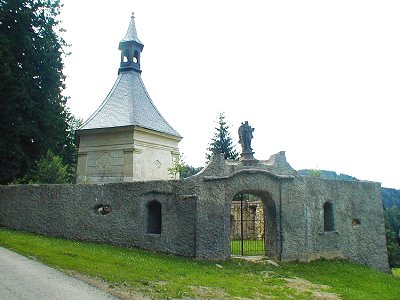 The chapel dating from the 17th century probably kept its shape which is divided into an uncovered inner yard and a roof chapel in the northwest. On 13 June 1898 the chapel burnt out. The parishioner´s wish was heard and they started to restore the chapel immediately. The chapel was consecrated again on 26 July 1899. Before the fire the tower had the onion-shape and bellfry. In the chapel of the Virgin Mary there was an altar in a rich decorated Baroque frame with two angels and the organ from the year 1902. Every year there used to be pilgrimages and "Zlaté soboty" (Gold Saturdays) along with celebrating masses. The Way of the Cross from Studenec to Bílý most in Rožmberk leads through the wood up the stone staircase right to the chapel. The years and donor´s initials are written on two stations of the Way. In 1869. Count Jiří Jan Jindřich Buquoy had the Way of the Cross newly built. First two stations were painted by painter Ströbl who also painted the pictures placed in the Crusading gallery at the Rožmberk Castle. After the year 1948 the chapel was broken into several times and most of the Way of the Cross stations were knocked down. At present the Way of the Cross and church are being restored by the Civil Association along with the municipality and there is a very real hope to reconsecrate the oldest Way of the Cross in this area.