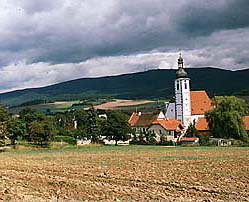 The school in Kájov represents an interesting chapter in the history of education in the region of Český Krumlov in the 17th and 18th centuries. This elementary school was run by the Cistercian order from Zlatá Koruna - an important pilgrimage location situated in an isolated position near Český Krumlov. There are considerable historical sources, documenting the activity of this school in the Baroque period.

The first mention of the Kájov school dates back to 1469 when a local priest Michael Pils with the help of a teacher, successfully defended the church against an armed gang. The parsonage and the school were burnt out. In 1629 the new school was built and the building also contained an inn and rooms for pilgrims. The teachers apart from teaching - served beer and food. This state of affairs lasted until 1674, when a former teacher Maxmilián Skerle, discharged for negligence, was granted the running of the inn by the nobility in Český Krumlov. On this occasion he confiscated most of the rooms and there was only one room left for the pupils and the teacher, who also lived there. The positions of an innkeeper and a teacher were definitely separated. The co-existence of innkeepers and teachers under one roof was often problematic - not without quarrels and brawls. This situation was caused thanks to the long lasting disputes between the monastery of Zlatá Koruna and the nobility of Český Krumlov about the right to sell beer in this place of pilgrimage.

The school was the responsibility of the abbots of Zlatá Koruna, who appointed its teachers. The teacher was a subordinate to the Kájov's priest. Kájov belonged under the patronage of the monastery and therefore the priests were chosen from the religious order of Zlatá Koruna. The teachers usually came from the towns subjected to Český Krumlov or from Upper Austria. The school was attended by very few pupils - usually only 5 boys. It is documented in the report of the abbot to the archbishop in Praha in 1700. In spite of this low count, the teacher usually had a helper. The curriculum contained reading, writing, mathematics and the basics of music, to which great attention was paid. In 1674 a doctor from Eggenberg, Ondřej Volkshofen left a legacy of 500 gold coins in order to "educate" the youth in church music, reading, writing, and arithmetic. The teacher used to have all his disposal, apart from the room he taught and slept in, a small adjoining garden. He was allowed to use the meadow, two cows, and on Sunday, he could have his dinner at the parsonage. In the seventies of the 17th century, his wage for six months was 8 gold coins and 20 kreutzers as well as some produce.

The duties of the teacher are contained in a unique school order from the end of the 17th century and the beginning of the 18th century. The teacher was supposed to love virtue, to hate vice and to live orderly and righteously to give a good example. One of his main tasks was to keep the church clean and beautiful. Only after that came the education. His duty was not only to teach writing, reading and arithmetic, but also good ethics and virtues. He was supposed to make sure his pupils do not disturb the pilgrims and behave quietly in the church. The other points concerned the correlation with the priest. The teacher was not allowed to leave Kájov without the priest's permission and had to obey all his rules and orders. The teacher was obliged to care for the church music, to ring the bells, to wind the clock and to lock the cemetery's gate. Apart form all these duties the teachers in Kájov spent their time selling pictures of the saints, rosaries, candles and scapulae to the pilgrims. These objects were supplied by the spiritual order. The School order confirms that the teacher was more of a general helper for the parsonage and church than an independent educator. The Kájov's school order shows, that not the education but the moral virtue was the most important thing for the educational system.