The historical liberties and guilds in Rožmberk nad Vltavou

The oldest privilege of the town Rožmberk originates on 8. February 1362. It was published in Krumlov and brothers Peter, Jošt, Oldřich and Jan of Rožmberk are giving to town Rožmberk so called "royal right". The town follows law usage of town Písek. It means, what must inhabitants of Písek do for king, the Rožmberk townsfolk must do for Rožmberk family. Townsfolk could buy possession in surrounding villages, but from this possession must pay benefits. They go to war only at that time, if the enemy entered the country. An appeal from local court went to Krumlov, the last was always the lord. To paper are on greaseproof strips attached four round seals of brothers from red wax.

On the nineteenth March 1488, then after 126 years, bears Vok of Rožmberk to the citizens of Rožmberk a paper from Peter, Jošt, Oldřich and Jan from 8. February 1362. This repeated confirmation of liberties arranged certainty, that even after 126 years it persisted. Also to this liberty is on greaseproof strip attached the seal of Vok of Rožmberk from a red wax. The third here mentioned privilege was published on 29. December 1514 in Budín and king Vladislav dispenses: "on entreaties from Peter of Rožmberk and at Krumlov to his town Rožmberk and its inhabitants a weekly market on Saturdays and two yearly fairs in length of eight days. One on Sunday after the Conception of Maiden Mary and second on St. Fabián and Šebestián. In addition to it, we are giving to town Rožmberk this grace, none can produce malt nor brew beer within one mile from town". To this liberty is attached the royal seal. 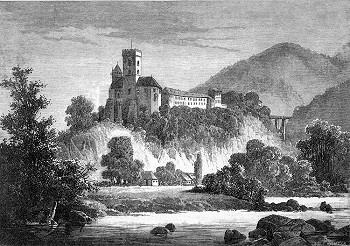 First guild based in Rožmberk came across in the year 1506 during rule of Petr IV. of Rožmberk. It was a guild of weavers. His liberties restored Vilém of Rožmberk in the year 1553. This Rožmberk's prince in the same year 1533 issued the Guild liberties for tailors and bakers, in the year 1554 for shoemakers and in the year 1588 tanners. The last privilege to Rožmberk's guild - the butchers - issued Petr Vok of Rožmberk in the year 1597. For liberties for guilds in town Rožmberk was important inner mechanism of guild. In detail were always fixed conditions for arriving in guild, its meetings, stated who is at the head of guild, the way of working with finances, problems connected with followers and journeymen. Relatively considerable attention was given to the religious questions in guild and an important component of guild liberty was the "mileage right", so prohibition of sale of goods by other handicraftsmen in Rožmberk and one mile far from town.

Rožmberk's guilds were of service to the whole Rožmberk's manor and only later the separate towns and monasteries at manor were establishing their own guilds. So for an example in the year 1568 was the independent guild of weavers in Vyšší Brod and in the year 1556 in Frymburk established. Their guild liberties were derived from Rožmberk's ones, though especially at entrance into the guild in these new places one had to pay much more. Masters working in the guild Rožmberk were passing to new guilds without any other charges. Interesting is an entry of bakers, when two guilds were established at the same time in Rožmberk and Frymburk. There was in detail distinguished the quality of white and gray bread. It was stated, when about is bread to be baked and meaning of the honest weight. To check the bakers there was identified a councilman and every offence was punished by confiscation of the whole stock of bread, which was given to schools and poor people.