History of the Český Krumlov Region

The region of Český Krumlov is a part of Bohemia and belongs from the geographical position and the historical and cultural side to the region of central Europe. Thanks to its key position on the southern part of Bohemia, generally on the edge of the Slavonic and German world, more precisely on the borders of Germany, Austria and Bohemia, the Český Krumlov region with its regional town of Český Krumlov played an important part in Czech history. The cultural, political and agricultural influence from the north (centre of Praha), instigation from the German side or the south orientation to position of Vienna and the region of the Mediterranean often met here, they complimented each other, mixed together and displayed their personal feelings, specific cultural environment and characteristic forms of art. 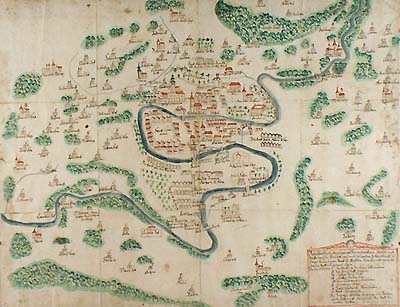 The settlement of the region took place along the rivers during the Stone Age, about 50,000 BC. The small Dobrkovická Cave near Český Krumlov, is the most important and also the oldest archaeological site, with findings of fire sites, stone instruments and bones from hunted animals, including a mammoth. 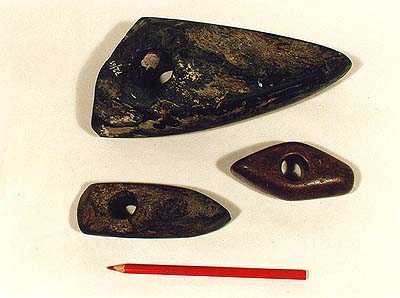 The level of settlement in the region during the 1st century BC, is supported by the existence of a large Celtic site at Třísov. The Celts took control of a large area of Europe, and came into conflict with Roman soldiers. They built an oppidum with the size of 2 ha in Třísov, which was protected by walls. During a professional search of this area, certain special findings came to light, remains of buildings, workshops, santus santum, but also several pieces of everyday equipment, as well as jewellery and coins. Even then the region was oriented economically and culturally to the south, towards the Dunaj river and the Mediterranean (Archaeological Research in the Český Krumlov Region).

The characteristic of the following centuries is the infiltration and settlement of Germanic tribes. In the 8th century, Slavs came into the southern region of Bohemia, which is confirmed by uncovered Slavic sites in Boletice and in Český Krumlov. The Slavic tribes accepted Christianity, and slowly began to participate in the development of the central European civilisation, especially after their unification of a Bohemian tribe at the end of the 10th century. 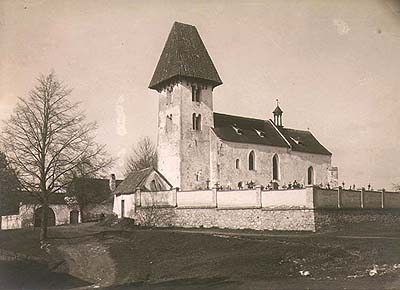 At the beginning, the whole region became the property of Bohemia dukes, who were based in Praha. In was in these circumstances during the 11th and 12th centuries when many new Ecclesiastic institutions were set up and so part of the territories fell under the management of the monasteries in Praha and its neighbourhood. The trading route, which led from the Austrian Alps to the centre of Bohemia, was very important, beside the connection with Praha, for the economical and cultural development of this region. (Historical Routes in the Český Krumlov Region). The oldest Romanesque buildings in this region come from this period, for example the church in Boletice. Together with the stabilising of the Bohemian aristocracy towards the end of 12th century, there was a penetration by the members of the powerful Witigonen family (The Vítkovci) into this region, where they seized a great part of the land. 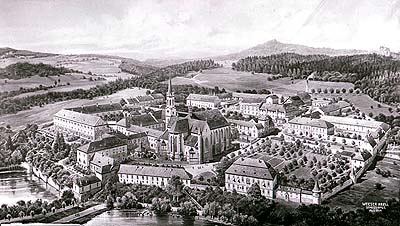 During the 13th century, a colonisation of the wooded land which was sparsely populated took place. The colonisation was initiated not only by the Witigonen family but also by the monarch, who wanted to strengthen his position in this region. The castle of Rožmberk was established by the Witigonen family (Rožmberk nad Vltavou Castle) and a little bit later also the castle of Český Krumlov (History of Český Krumlov Castle), in whose vicinity the serf town was established. On their initiation the Cistercian Vyšší Brod Monastery was established in the 1259. The Cistercians, connected by culture to the educated French environment, where the order originated from, and by maintaining frequent contacts with the Austrian countries, where they came to the Monastery of Vyšší Brod from, spread their independent artistic feelings, were establishing new villages and promoting modern forms of farming. 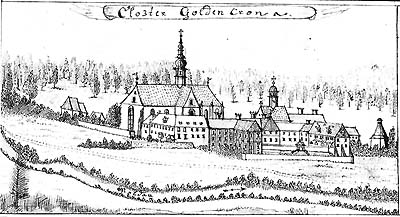 The colonisation was also supported by the monarch. Because of his possessions, he invited into the sparsely populated areas of this region people from the neighbouring countries. The new settlers remained here, and for many centuries lived in harmony on the cultural and economical side with the local population. From the Middle Ages to the beginning of the 19th century, patriotism was not foremost in the people's minds but allegiance to the land without regards to the language they spoke. A significant deed of king Přemysl Otakar II was within the framework of colonisation, the setting up of the Cistercian Zlatá Koruna Monastery in the year of 1263. The monks took the merit of wide spread cultivation in the region of Český Krumlov, which formed part of the monastery's possessions. The monastery which was situated to the centre of the Witigonen estates, was supposed to serve as an outpost of the king's power to limit the spread of the Witigonen family. These types of activities very often led into conflicts and tension between both sides.

After the Lords from Krumlov had died out in 1302, the estates of Český Krumlov were inherited by another branch of the Witigonen family - the Rosenbergs. They owned the Český Krumlov estates, which formed an independent estate both economically and culturally, for three hundred years until 1602. The Rosenbergs took a frontal position amongst the aristocrats in the Bohemian kingdom, therefore they were connected to many political and cultural events in the king's court in Praha, which during the reign of the king Karel IV, and his son Václav IV belonged to the prominent cultural centre of contemporary Europe. Thanks to its position, this region maintained contacts with the neighbouring Austrian and Germanic countries, which brought mutual enrichment to all of them. These achievements prominently influenced the artistic development (architecture, sculpture, painting) in this region, which during the Gothic period reached a high standard. The biggest customers and buyers of artistic pieces were the Rosenbergs and the local Cistercian monasteries in Vyšší Brod and Zlatá Koruna. 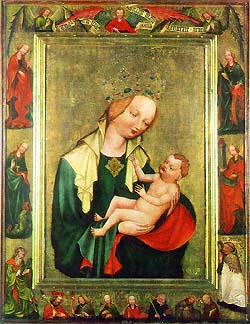 The cultural continuity in the region was not broken even after the eruption of the religious Hussite wars after 1420. Hussites who fought to clean churches from falseness, took a negative position to sacred art, and even refused a court culture of the high standard of the previous period. The Rosenbergs who stood at the head of the Catholic aristocracy, made from Český Krumlov a cultural and diplomatic centre of the country instead of Praha which was affected by Hussitism. Because of this, many aristocrats, church dignitaries and artists took refuge in Český Krumlov. Their presence greatly affected the spiritual and artistic development of this region. On the political and cultural level, the Rosenbergs followed in the traditions of Praha's royal court.

In the second half of the 15th century, the Late Gothic came to being, which especially in art left behind many historical monuments of high quality. An example are sculptures of so-called Beautiful style and Gothic panel painting. A well known Rosenberg building works got involved in the construction of many buildings, its members came from neighbouring countries. (Cultural History of the Český Krumlov Region).

Towards to the end of the 15th century, the influence of Italian humanism and Renaissance began to infiltrate into Český Krumlov, in connection with the studies of several lords of Rosenberg, some burgers and monks at the Italian universities of Padua and Bologna. The Gothic tradition is very strong in the Bohemian environment, that is why the Renaissance only came into it's own in this town during the reign of Wilhelm of Rosenberg (1535 - 1539) after the second half of the 16th century. This well known magnate of the Bohemia kingdom, allows the grand rebuilding of the original gothic castle, into an ostentatious Renaissance place of residence, (Český Krumlov Castle in the Renaissance Period) under the direction of Italian artists. Renaissance visibly changed the appearance of the whole town, because the rebuilding affected not only the town houses of lords but also other properties. 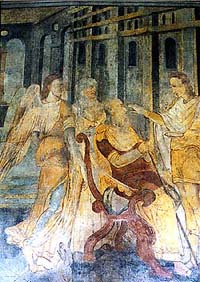 After a period of prosperity, a period of quietness came and in 1602 the last ruler of the Rosenberg estates, Peter Wok von Rosenberg (1539-1611) sells to king Rudolf II. von Habsburg his Český Krumlov estates which are in debt and retires to his chateau in Třeboň. Even before this, the castle of Rožmberk was passed by the childless Peter Wok von Rosenberg to his nephew Jan Zrinský of Seryn. He also died leaving no heir to his estates, and therefore the estate passed to the family of Švamberk. After the decease of the Rosenberg family this region fell into stagnation, which was also later effected by the beginning of the Thirty Years' War, 1618, which had a negative effect on the life of the entire society.

During the 17th century, new aristocratic families from abroad came into this region, where they became possessions. In the year 1622, the Český Krumlov estates were given by king Ferdinand II. von Habsburg to an Austrian family of the Eggenbergs. The castle of Rožmberk which was confiscated after the battle of Bílá Hora in 1620 from the Švamberks, and was given to the hands of the Buquoys who originated from a region of the present Belgium. This aristocratic family significantly added to the growth of Baroque culture on their newly acquired estates.

During the reign of the last survivor of the Eggenberg family, the art loving duke Johann Christian I. von Eggenberg (1641-1710), who set up in Český Krumlov a prestigious aristocratic court and also carried out prominent Baroque alterations of the castle (Český Krumlov Castle in the Baroque Period) and ecclesiastic buildings within the town. During the Baroque period a greater interest in religion is noted, which also reflects in the renovation and new construction of churches, chapels and pilgrimage places. (Places of Pilgrimage in the Český Krumlov Region). The appearance of the countryside was greatly affected by similar buildings in this region, but they did not reach such a high quality as during the Gothic period. The region of Český Krumlov was traditionally known as a Catholic region, therefore after the battle of Bílá Hora in 1620 the return to Catholic belief took a relatively short time and was without any resistance. The strengthening of the Catholic religion amongst the local people was influenced by elaborate religious celebrations, which took place for example at the famous Kájov Pilgrimage Church. Famous great fairs took place here under the influence of Baroque religiousness and with participation of the duke's court, and hundreds of believers from the whole region. 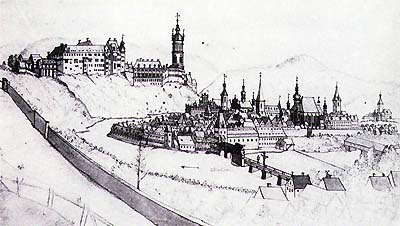 In 1710 the Eggenberg family became extinct, and their estates were inherited by a German ducal family of the Schwarzenbergs. They were orientated towards the Emperor's court in Vienna in their political and cultural thinking, from where they called artists who worked on the Baroque and Rococo renovations and alterations to the castle residence. The ambitious building alterations came to a head during the reign of duke Josef Adam zu Schwarzenberg (1722-1782), who is also the founder of the famous Baroque Castle Theatre in Český Krumlov From the end of the 18th century the whole region went through a period of dampening in economical and cultural development. The Schwarzenbergs turned their attention towards the castle of Hluboká nad Vltavou, where they later moved to. Český Krumlov then lost its position as a town of the royal residence and became a provincial town.

The industrial evolution during the 19th century did not mark this region as much as other regions, because it lacked natural resources as well as the transport network. Heavy industry was not established here, the main manufacturing processes concentrated on timber and paper mills. The region of Český Krumlov was left aside of the industrial development and urbanisation, that is why the ancient feel of Český Krumlov and the beauty of the surrounding countryside have been maintained to this date. Adalbert Stifter (1805-1868), a Bohemian and German writer, who came from Horní Planá, was inspired by the number of historical monuments and the picturesque landscape of the countryside. 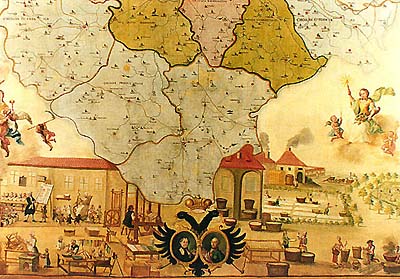