The Parish Church of St. Bartholomew in Frymburk

The church was built before the year 1270. Vítek of Krumlov presented the church to the Benedict provostship of Zátoň located near a town of Český Krumlov in 1270. In 1277 Prebiziaus, the first priest of Frymburk, is mentioned in writing. Then Ulrich Wosner was a parish priest from 1301, and on 29 May 1309 the parish was passed to the Premonstratensian Monastery of Schlägl in Austria. They managed it until 1946. It is interesting that Jindřich of Rožmberk had established the parish of Frymburk to be kept by Bohemia country, Prague diccese, under The House of Rožmberk. However, the presentation dating from 29 May 1305 brought a litigation which was completely solved in 1317, when the Benedict provostship definitely gave up the parish of Frymburk.

The parish was given presents by degrees. A mill of Frymburk in 1315 and later the right of fishing. The parish of Frymburk unlike other parishes of Vyšší Brod was taken out from the interdict by Pope Paul II dating from 1468 regarding prohibition on doing divine services. Johannes, a parish priest of Frymburk, was not able to manage the parish on his own, so reinforcements from Schlägl (Austria) were called in. People were also going to Rožmberk and Krumlov. There was an elementary school next to the parish of Frymburk from about 1474. It became extinct in 1777. The compulsory education was established in the same year. Martin Plicker, a parish priest, is said to have been killed, and the parish was occupied by Protestants. They were oppressed in Frymburk and its surroundings between 1586 and 1593. The agreement regarding sending a curate to Frymburk dates back to 1763, when the monastery of Schlägl (Austria) granted a wish. In 1765 Kaspar Langer, a curate, was sent to the parish of Frymburk. A very slow litigation between the parish and wealthy citizens started in 1868 and was over in 1879. The parish of Frymburk was promoted to the deanery in 1879. Eduard Wirmsberger became the first dean. Jan Valerián Jirsík of České Budějovice, a bishop, made Confirmation in Frymburk on 6 June 1880. There was a religious mission there in 1885. 3,056 people confessed themselves during the religious missions. 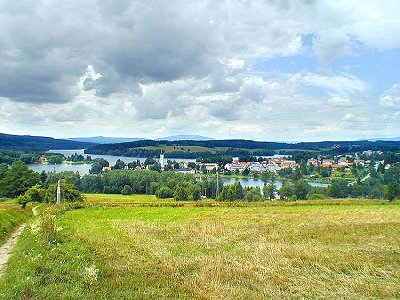 The parish church of St. Bartholomew in Frymburk was being rebuilt at the beginning of the 16th century. The rebuilding was completed in 1530. The nave had a ceiling made of wood. In 1648 Swedish cuirassiers burnt out the church along with the parish. The monastery of Schlägl (Austria) started to restore the parish church in the spring 1649 and completed the restoration work in 1652. The whole restoration work cost 3,253 gold coins. The whole amount was paid by: the monastery of Schlägl (Austria) 1,151 gold coins; the parish of Frymburk 1,121 gold coins; parishioners 981 gold coins. Jan Worath, a wood-carver, finished the early Baroque altar in 1662. Comely but a little bit uniform faces with conspicuous eyes, stood cheek bones, a thin nose and hanging corners of the mouth are a distinct expression of the wood-carving work by Jan Worath. There was another destructive fire in 1866. The church roof, parish and out-buildings burnt down. The restoration work was completed at the end of September 1867. On 8 June 1870 they started to build a tapering tower of the parish church. In 1891 a new pair of organ made by Lachmayr of Urfahr was consecrated. It cost 1,400 gold coins. The pews, pulpit and shrine altars were repaired in 1892. Paintings of Stations of the Cross by Josef Maške were made in 1894. The pictures without frames cost 160 gold coins. They were framed by Elientzinger, an Austria framer (Linz), for 200 gold coins. Three glass painted windows were fitted in the presbytery in the same year. The latest restoration work has been done gradually since 1990. 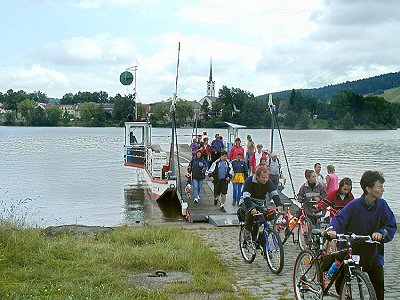 Further information:
History of the Vyšší Brod Region
Stations of the Cross in Frymburk
A Walk through the park in Frymburk
The Elementary School in Frymburk
Frymburk