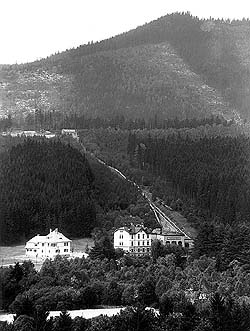 The first mention of the possibility to build a power station under the rock formation of Čertova stěna (Devil's Wall) near Vyšší Brod comes from information that has survived and originates in the eighties of the 19th century. In 1894 the Ignác Spiro & Söhne company - a paper mill for bond paper in Český Krumlov - Pečky, the advisor to emperor Robert Eisner from Vienna and Ganz & Co. Budapest - an engineering works in Leobersdorf bought the so-called Steindlův hamr (Steindlhammer) under Čertova stěna. By this they manage to obtain the water rights on the Vltava river from the town of Loučovice to Vyšší Brod. From the same time, came the first plans for the locating of a power station which were prepared by Ing. František Karel from Vyšší Brod. It clearly shows the idea of directing the flow of the Vltava river under the town of Loučovice into a gradually declining canal, and leading up to the headland of Čertova stěna, and from there in pressured pipes into the engine room of the power station, which was on the river bank of the Vltava river. Because of that the patron father of this project became Ing. F. Karel, even though the final project was prepared by the design office of Ganz & Co. Based on these first studies an application was placed in November 1894 to obtain permission for the building and commissioning of this power plant. According to an unconfirmed information, the excavation of the supply canal started in 1896, but the building proceeded slowly through the hard and rocky ground. The actual planning approval for the work itself was obtained and approved on the authority of the emperor and king's representative placed in Praha, Bohemia on March 9, 1898. The project documentation was gradually changed in small details and completed. One of the last major changes comes from 1902, when it was decided to use only four new Francis turbines, which had more out-put, instead of the eight originally licensed Girard turbines. 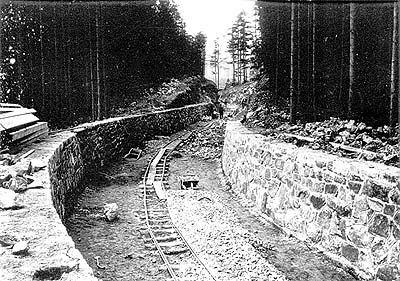 The power station was completed by the end of 1902 and commissioned in 1903. The final inspection of the building was carried out on October 16, 1903. The building work of the power station, the canal and the weir was carried out by Diss & Co. - a company which specialised in concrete buildings in Vienna. The whole water project during its commissioning consisted of the following sections :

Apart from the already mentioned paper mill, power was supplied by means of the power station to the towns of Vyšší Brod and Český Krumlov, and other surrounding small towns and villages. Also at the same time, it was possible for the first time to arrange transport of logs over water in the region of the Vltava river under Čertova stěna, which up to that time was un-navigable. The logs were floated from Loučovice through the opened inlet canal up the lock, where it was gathered by the 1.5 meter long edge of the water overflow. With the availability of the afflux wave, the logs were pushed over to the canal which led parallel with the pressure pipes and ended in the lower waste canal which opened into the Vltava river.

In 1911, the engine equipment of the hydroelectric power station was supplemented by the fourth hydro-set, which was supplied by the Voith - Sankt Pölten company. It again consisted of a Francis turbine with horizontal turbine shaft, but the output was already 4,000 HP at 420 revs per minute, and absorption capacity of 4.2 m3 per second, which was permanently connected with a generator with an output of 2,700 kW, producing three-phase altering current with voltage of 15,500 V and frequency of 42 Hz. The switching station was extended, two autotransformers were placed in it and the transfer voltage of the transmission line increased to 22,500 V.

Large seepage from the inflow canal, required repairing around 1916-1919 approximately, which was carried out by the Pittel & Brausewetter company from Praha. Because it was not possible to put the power station out of operation for a long period, the water from the canal was diverted using a provisional wooden canal of 91 metres in length, which was once repositioned, around the 180.8 meter long reconstructed place. Near the safety outlet, reinforced supporting pillars were constructed. 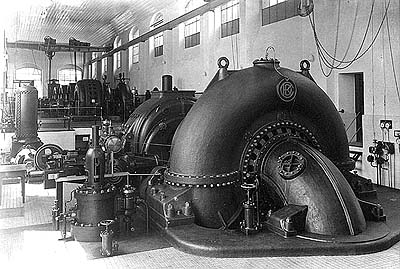 During the twenties of this century, the hydroelectric power station was greatly extended and rebuilt. In 1924-25 the Wayss & Freytag A.G. company and Meinong GmbH from Brno built in front of the lock on Čertova stěna, a settlement and levelling reservoir. In 1926 the Vítkovice Iron and Steel Works company (Vítkovické železárny) in Ostrava-Vítkovice supplied the second pressure pipe-work, which measured 640 metres. It was again made of steel and riveted, with a diameter of 2,000 mm and wall thickness from 8 to 18 mm. The effort to utilise the water from the Vltava river led to making the edge of the weir under Loučovice solid by a simple extension. It is also possible that a small house was built at the same time on the pillar between the basic and gravel outlet. When this took place we do not know, but never the less this extension and the little house can be seen on photographs from 1926. Because this system was not sufficient, in 1928-29 the construction of a new concrete and steel weir took place, and the second supply canal was connected to it. The project was prepared by the Technical Design and Building Office of Ing. J. Pfletshinger & Co., from Vienna and Štýrský Hradec. The work was carried out by Wayss & Freytag A.G. and Meinong GmbH from Brno, later from Teplice - Šanov. The crest of the weir was movable, was divided into two sections with a length of 14.6 metres and an idle outlet chamber with a width of 3 metres. The lowering and lifting of the crest was carried out according to a system designed by Huber-Lutz, which worked only on the basis of transferring water under the weir flaps, and with the help of its pressure it enabled their lifting. The inlet into both canals was protected by bar screens with a double floor. The lower floor was used to catch sediments (sand, small stones, etc.) and was regularly cleaned through a gravel outlet. The old weir, which stood several meters up against stream, was maintained, only the movable weir extension was removed from it, and the leading pillar taken down. At the same time the original flow of water into the old canal was preserved, and was only used for floating logs . The new reinforced concrete canal was built parallel with the old one, was 3.3 metres wide, 3.5 metres deep and the position of it required a 210 metre long free section (above ground) by the idle outlet, near Čertova stěna. This canal was provided every 30 metres with an expansion joint, sealed with a wooden beam and copper gasket. The outlet into the settling and levelling reservoir was provided like the entry and as was the old canal, with a locking sluice gate.

The above mentioned work was followed from 1928 by a total rebuilding program and also by the final work in the engine room of the power station. The main hall had the eastern gable pulled down, and was extended by 17.5 metres including a new office place. The south side, with the old switching and transformer station, was rebuilt and extended, and here new workshop premises, a switching station and other necessary places were provided here. At the same time on the north side, the chamber of sluice valves was extended. This was all carried out due to the planned increased output of the power station, and supply of the fifth hydro-set. This was supplied in 1929 by the Českomoravská Kolben - Daněk Praha - Blansko company and consisted of a Francis turbine with horizontal turbine shaft, with an output of 10,860 HP at 504, respectively 650 revs per minute and absorption capacity of 10.3 m3 per second, which was permanently connected to the generator with a power output of 9,000 kW and generating three-phase alternating current with voltage of 5,250 V and frequency of 42 Hz, respectively 6,300 V during frequency of 50 Hz. 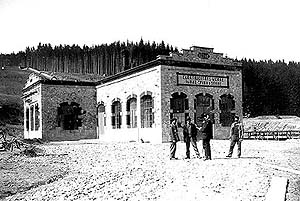 To start the generator, another special alarm set was built, which consisted of a Pelton turbine with an output of 170 HP at 630 revs per minute, and connected by means of disengaging coupling "Eupex" with a dynamo that had an output of 55 kW.

The hydroelectric power plant of Vyšší Brod provided work for quite a number of employees. The statistics from 1923 say, that it employed before expansion 21 labourers and 2 office staff, in the fifties the number of employees risen to seventy. Apart from the employees who worked non-stop on the supervising and running of the hydro-electric power plant alone, also on the water lock and the weir countless groups of maintenance workers were needed. Amongst the professions employed here were not only engineers, locksmiths and electricians but also builders, carpenters and even a gardener. Together with the building of the power plant in 1903, a three storey house was also built near by, to which was in the twenties added a villa housing several flats, which were for the administration staff. Otherwise the employees came to the power station from Vyšší Brod and surrounding settlements and villages.

By the development of the Lipno dam in the fifties, and by diverting all water from the Vltava river into an underground tunnel, the power station in Vyšší Brod lost its importance. Because several machines in the paper mill of Větřní were built to perform on a frequency of 42 Hz, water from the Lipno dam was temporarily diverted, till their exchange, into the Vltava canal, so that it could power the Vyšší Brod power plant. This plant only produced a smaller output, 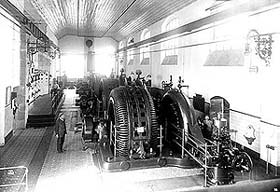 and the older machinery was slowly dismantled. After the work in the power plant ceases during the seventies, all the machine equipment and the building of the power plant was given as a manufacturing hall, to the South Bohemian Timber Factory (Jihočeské dřevařské závody). Other parts of the water project were not used and slowly deteriorated. Up to now both supply canals including the settling and levelling reservoir by the water lock have been filled with waste from the paper mill in Loučovice. It is used as a building for private recreation. One pressure piping (the older one) has been dismantled, the second is used by three small private power stations.

The project of the hydroelectric power station in Vyšší Brod was in its time a project unknown and unseen, which literally brought surprise to the expert public. It is marked as one of the first hydroelectric power stations not only on the Czech territory, but also in the Austro- Hungarian Empire. With its out-put which in the twenties was increased and reached nearly 17 MW, was without any doubt one of the biggest water power stations in Bohemia. Its establishment had a great influence on the early electrification of the towns of Vyšší Brod and Český Krumlov, and a large area of south-west Šumava. Because this plant was a private enterprise and was in German hands, the importance of this project, already from its birth during the first Republic, was covered with a cloud of fog, and intentionally forgotten. But still a visit of this project was recommended in different types of tourist guides and information booklets. The genius of this water project reflects also the relationship to an ancient story about the origin of Čertova stěna. Engineer František Karel proved, what long time ago the devil tried unsuccessfully, that it is possible to hold up the waters of the Vltava river, and divert them off of their wide canal.