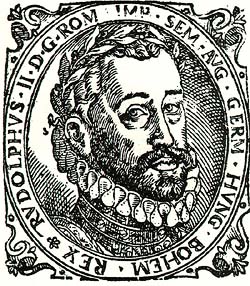 In 1601 Peter Wok von Rosenberg sold the Český Krumlov estates including the castle to emperor Rudolf II. Český Krumlov was then under Habsburg control till 1622. Rudolf´s son don Julius d´Austria also stayed at the Český Krumlov castle, and brutally murdered his lover there in a fit of madness in 1608. During disagreements between the Habsburg brothers Rudolf II. and Mathias, Český Krumlov was occupied by the army of Leopold, the bishop of Passau, who in 1611 devastated the whole surroundings of the town. Peter Wok paid off the Passov army to prevent further devastation.