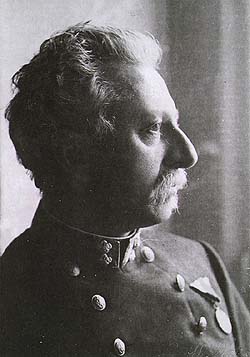 He studied Germanic, history and philosophy in Innsbruck. From 1883 he taught as an established secondary school professor at the German secondary school in Český Krumlov. In addition to teaching, Prof. Ammann devoted himself to the field of ethnographic research in the German speaking part of the Šumava Hills and was often called the "father of Šumava ethnography". The centre of his interest was the verbal folk arts, and he was mostly enchanted by various folk plays. Surely it would not evade Ammann´s interest that in the village of Hořice na Šumavě was a group of people performing the Passion plays (see Passion Plays in Hořice na Šumavě). At the time, the artists were playing from the scripts of Paul Gröllhesel a weaver from Hořice. Ammann was convinced that the Passion plays were the spiritual wealth of the village and that their large-scale production should be in the regime of the village and for its benefit. He supported the construction of a new theatre and the acquisition of necessary equipment, costumes and properties.