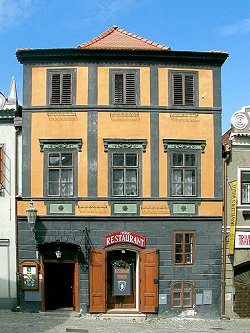 Description of the Building:
A one-storey row house with a saddle roof and a spherical hip to the street, the facade is divided by three axis with a false attic floor, reconstructed in classical style in 1884. On the ground floor is an extensive hall with a staircase to the mezzanine and a narrow entrance to the yard. On the top floor all the rooms have flat ceilings except the scullery (a kitchen without windows).

Architectural and Historical Development:
The house is characterized especially by the late-medieval period; from that time cellars, ground floor rooms with vaults and a vaulted section in the mezzanine with a stone portal have been preserved. On the top floor there is a Baroque construction of the ceiling. The facade and the already removed division of the entrance hall come originally from the 1880s,

Development of facade:
The restoration from the Middle Ages period appeared and in fact determined the present form of the facade. A cavetto ledge was built above the ground-floor. The probing between the 1st floor windows determined two airing windows. They originally formed a pyramidal-shape composition of the habitable room on the 1st floor. According to the preserved fragments we can assume that the window holes were framed with red lines. Any findings were not discovered from the Renaissance and Baroque period. In the Classicism period the facade was articulated with the lizen system, which was further adapted and a brown-and-grey-coloured scheme was used in 1884. In 1993 and 2000 the very careful plaster restorations were done. The lime coat of paint inspired with the historical coloured scheme was used. 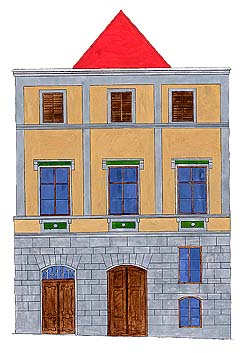 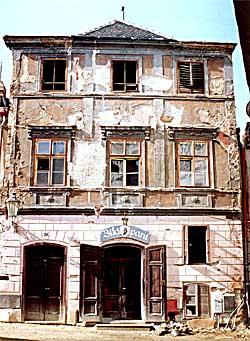 History of the House Residents:
We do not have any exact information about the owners of the house in the 16th century. About the middle of the 16th century is mentioned a certain Jíra Hrachovec and after him a further unknown Petschmüller (he might have been a miller at Peckovský mill). In 1572 Jaroš or Jaronin (Jeroným), with a possible surname Steiner, came to live there. The house belonged to Tomáš Steiner until 1634, followed by Matyáš Anderst. In the years 1689 - 1698 we meet there Jan Alt and after him a scribe František Josef Reichhardt, whose kin lived there to 1733. Since 1770 Josef Resk ran his saddle-making trade from there. To the end of the 18th century there lived Josef Ekert in the house, from 1781 Jan Schulz and in the first half of the 19th century the Stockingers. Josef and Anna Babler lived in the house at least to the 1840s.