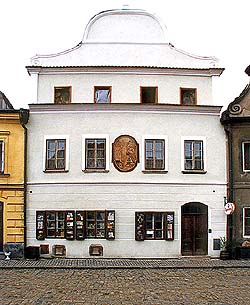 Description of the Building :
A one-storey house with a front divided by four axis. The last reconstruction was carried out during Classicism. The facade disposition, as well as the inner layout of the house, are of Rennaissance origin. On the ground floor is an original preserved Rennaissance hall with cross vaults with high ridges on the edges of the cells. There is a ridged circle set in the vault head area. There are two younger rooms with barrel-vaults on the ground floor. A passage and a yard where the court wing abbuts onto the main building are situated there. At the level of today´s mezzanine is situated a Rennaissance upper hall with rich ridged vaulting. Rich Rennaissance decoration (sgraffito and painting) was found in a large part of the house as well as on the street and yard facade. A homogenous decoration was done not only in the bottom entrance hall and in the upper hall on the mezzanine, but also in a section, leading to the loft. The yard is finished by a building, resting on two free barrel-vaulted sections, abutting onto the original town fortification system.

Architectural and Historical Development :
The originally Gothic building was completely rebuilt in the Rennaissance period, in the last quarter of the 16th century. Further minor reconstructions of the inner disposition and the street facade were carried out during Classicism. Some small partial reconstructions were done also after 1945. In 1993 a rich Rennaissance ornamental decoration in both halls and the connecting staircases was discovered during a partial reconstruction of the building. In the bottom hall were found coats-of-arms of Krumlov lordships in stucco circles. A research of the facade in 1994 uncovered valuable decorative layers not only on the street facade, but even in the yard. (see also Archaeological Research in the town of Český Krumlov). 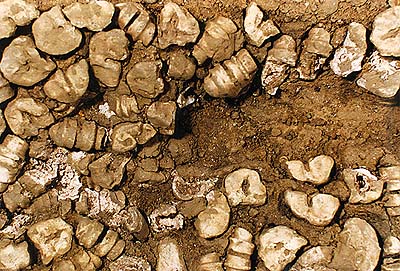 Significant Architectural Features :
A rich ornamental decoration of the ground floor heraldic hall, sgraffito decoration in the yard, a fragment of a unique bone pattern paving in the heraldic hall. 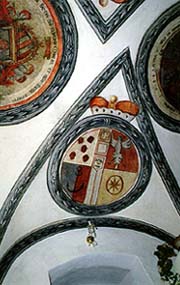 History of the House Residents :
At the beginning of the 16th century a carter Lorenc lived in the house. In the 1530s and 40s it belonged to a member of the town council, a tanner Řehoř. In 1589 a town scribe Fridrich Litvín bought the house. He lost his post and fortune because of adultery and in the end went to prison. The house was sold to the town council in 1600. But Litvín was probably a very competent clerk, because he organized and translated Krumlov town privileges into German in 1593. From 1658 the house probably belonged to a tailor Leonard Dorn, who also worked for the Krumlov castle. In the years 1720 - 1725 a town official Jan František Antonín Tschernichen lived there. From 1744 draper´s trade was developed in the house, first by Ondřej Obermayer and later by Jakub Beneš, whose family owned it to the 40s of the 19th century.

Present Use :
Bohemia glass shop, Bed and Breakfast, Restaurant U dobráka, Exchange office. On the upper floors are two flats of the house owner. 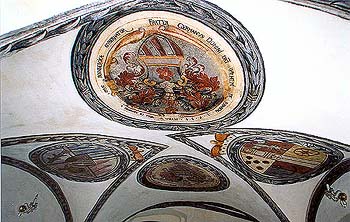