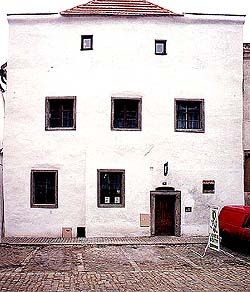 Description of the Building:
A one-storey corner house with a late-Gothic core, reconstructed in the Rennaissance period and in the second half of the 17th century. On the ground floor is a rectangular stone portal with a moulded stucco frame. The passage on the left side of the front is vaulted over by a diaphragm arch.

Architectural and Historical Development:
The house, built probably in the 15th century, is of Gothic origin. In the Rennaissance period the gables were additionally set up, and the setting of the attic front with plaster blocks is especially worth mentioning. The vaulting of some sections is also Rennaissance and was built together while placing the ceilings.

Significant Architectural Features:
The house is especially valuable as an important element of a historically developed area. Notable is a side face wall which has several small Gothic windows on the first floor from which one of them has kept not only its stone jambs, but even a belt course.

History of the House Residents:
Although the house existed even in the 15th century, the documents which would evidence the property holding are missing. The first known owner was a maltster Blažek who was a member of the town council from 1515 - 1519. After his death Jošt, who married Blažek´s widow Barbora, looked after the house and the malt-house. The maltster Jošt was also a member of the town council in the 1530s and 40s. Then several owners with many different professions changed hands. During the 16th century there were for example a tailor Jan Köhler, a furrier Jeroným Mild and a butcher Tomáš Schemerle. In 1619 Tomáš Ziehensack lived there and probably owned it even in 1654. Butchers Adam Schmidt and Václav Řídký respectively lived there from 1666. In 1714 Lorenz Kurz moved in, followed by a knitter Matouš Krembscher. From the 1740s the house belonged to several generations of the Tragau family.