Description of the Building:
Ground floor building with modern facade and attic. 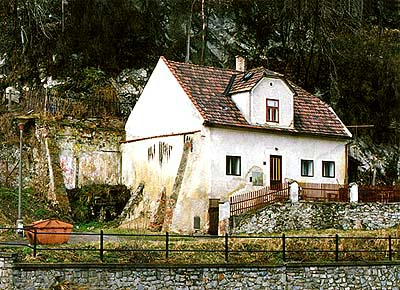 Architectural and Historical Development:
Rooms with flat ceilings and joist ceilings. The staircase permits increased floor space. The house is from the first half of the 16th century and was reconstructed in 1925.

History of the House Residents:
We do not know much about the first residents of the house in the 16th century. We only know that the house was occupied by a weaver. From 1617 - 1621 the house belonged to Petr Puma or Pauma. A grinder Štefan Pierpauer resided in the house until the middle of the 1620's. In 1679, after a line of other owners came via a princely hunter, František Jakub Janovský, who lived in the house until the beginning of the 18th century. In the first three decades of this century a drapery trade was conducted in the house. In the house resided drapers Jan Karel Salussa, František Rehberger, and, in 1734, Vincenc Tukh. Future owners of the house included a disabled person, an imperial army member, a teacher, a clerk, and a hewer. In 1929 a tailor lived there, along with a locksmith, and later a shop was in the house.