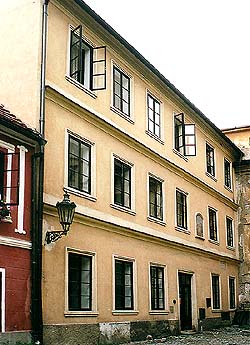 Description of the Building:
Two-storey building with a neo-Classical facade from the 1880\'s on which are the preserved remains of the original decoration. On the right above the entrance, between the first floor windows, it is possible to observe a fragment of a mural, features of St. Sebastian and Florain (restored in 1986). Further on the right, above the ground floor windows is an original part of the sgraffito decoration.

Architectural and Historical Development:
The building is of late Gothic origin which was built before 1538 (there was found a Gothic plaster). A Renaissance adaptation is reflected by the preserved sgraffito. The building was radically reconstructed in the 1880\'s, when it was also deepened towards the river.

History of the House Residents:
The first known owner of the house was Petr Veselý, from whom the house was bought by Michálek. From 1538 the house 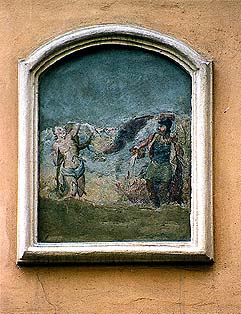 belonged to a malt maker named Filip, and another owner, Asum Froschauer, was also a malt maker. At the 1590\'s, the house occupied respectively by Zikmund Schwingerhamer, a butcher, Bartoloměj Landsknecht, and Kateřina Reichenthallerová. The Reichenthaller family resided in the house until 1681, and one member of the family, Jan, was a painter. During 1744 - 1768, a twister trade was conducted in the house. At that time a twister, Jakub Feyrer, lived there, and shortly after him Kašpar Koutný. A carpenter, Antonín Leyerer, resided in the house for two years. From 1770 until 1790 the house belonged to the Winkler family. From the 1790\'s the Meidl family resided in the house, and from 1818 Max Schullerbauer lived there, until at least the 1840\'s.

Present Use:
The building is not used at present 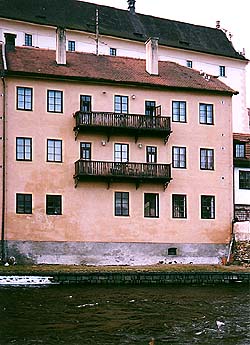