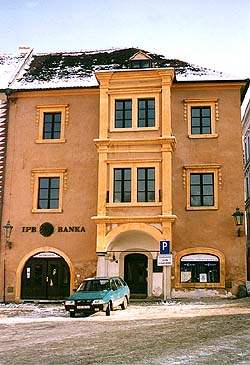 Description of the Building:
Approximately in the center of this two-storey, corner building is a buttressed oriel that protrudes foreward into the square. It is supported by two Tuscan coulmns, between which is a wide archway. The front facade of the building is sub-divided by contoured cornices. Around the windows are stone shams with contoured cornices aboves these. On the sides of the windows there is terracotta ornamental work of a Classical plait design. The interior ground floor is subdivided into two sections, Both of which are barrel vaulted. The space in the first, and part of the second floor is of a Renaissance style, but still contains its original Gothic vaulting. The cellars are vaulted with stone, barrel vaults.

Architectural and Historical Development:
The building contains its original Gothic core. Radical reconstruction occurred in the Renaissance period, and around the years 1510-1520 an extraordinary early Renaissance wall mural of the Roman satirist Persia was painted on the first floor of the building. Further redevelopments occurred before the the middle of the 19th century. Restoration work was last carried out in 1979-80.

Significant Architectural Features:
Fragments of the 16th century wall murals which are documented to be from the early period of Humanism in Krumlov. 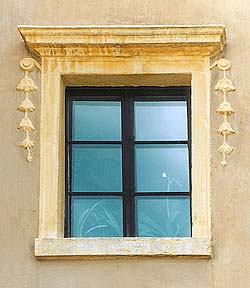 Painting restoration:
During the great restoration of the house in 1979 has been discovered by exploration of plasters the mural painting on one wall in room on the second floor. After uncovering was explored large fragment of the figural tableau and under the ceiling greater part of painted vegetal festoon with the Rožmbergs´ emblem.

Scene of excited and gesticulating men and women at a balustrade with skittle shaped parapet in front of the statue of antique goddess (Venus?) is an illustration of satirical - moralizing verses written by the Roman poet Aules Persius Flaccus and we can suppose that such a painting had its continuation on the other walls of this living room. Painting (although preserved just fragmentally) shows high artistic value and it is realized by technique fresco-secco with illusory modulation of shapes. Its full color recognizes the lasting late Gothic colorfulness, but its whole character shows, that author was either under influence or coming from North Italian environment. The topic of Roman poems comes from early phase of renaissance humanism, which developed in Český Krumlov thanks to Václav from Rovné and Petr from Rožmberk. From the owners of this house, who could order such an important painting, it had probably been Václav Albín from Helfenburk, who has held since 1522 several position at the Rožmberk manor and whose family owned the house even in the second half of the 16th Century. Paintings have been probably whitened during restoration in at the end of the 16th Century and that is why they are so damaged. Detailed evaluation of these extraordinary paintings is aim of the further studies.

The painting has been preventively covered by stickers, so it can not be damaged during the restoration works. Later on has been decided that painting will be transported to the same room on the first floor, where it becomes a part of a prestige store. That is why it was took down in 24 pieces. At first the protective stickers were removed, painting surface cleared, strengthened and belted with new stickers necessary for painting removal. Separate pieces were on the back side abraded into the thickness of plaster necessary for new implantation and on the reverse side were parts strengthened. In 1980 were the painting inserted into the new plasters on the first floor. Removed pieces were on the reverse sides straightened and provided with insole of thin textile by light strengthened plaster. After setting, the stickers were removed, surface cleared and damaged areas filled with cement. The painting had lot of damages and that is why it had to be often retouched, carried out by lighter local shades for an optical consolidation of painting.

Above the figures can one read several verses, from which just two have been defined:

History of the House Residents:
The first known owner of the building (1424) was Václav Tlačiko. He was followed by a shoemaker named Linhart. After Mareš Zahradec were various more significant owners including a goldsmith Albrecht, from Nové Hrady. Albrecht owned the building from the beginning of the 16th century and sold it to a butcher named Martin in 1520. In 1543, the building was obtained by the Rosenberg chancellor Václav Albín of Helfenburg. His descendants then traded the building with Peter Wok´s secretary, Martin Šurer from Waldenheim, for his building at Široká No. 77. Martin Šurer began to renovate his new building but he did not end up staying here for too long. He was infected with typhoid fever while on a visit to the castle in Třebon. He suffered from a high fever and spells of delirium, and one night ran away from his nurses, jumped into the well between the castle and the brewery and drowned. Peter Wok then gave the building to the Český Krumlov magistrate Jan Benýdek from Veveřín and Mysletín who continued the Renaissance renovation project. In September of 1601 there was a wedding of Benýdek´s son, which was also attended by Peter Wok.