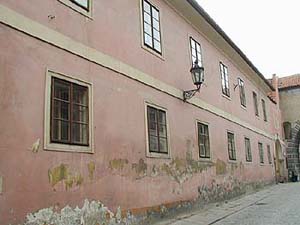 Description of the Building:
Two story house with seven window axes in a plain facade with ribbon-shaped decorations and a carriage way with hemicycle vaulting in the right. The main building has Renaissance vaults with groins and caps. The adjacent part of the south wing has a straight arch and contacts an unusually thick wall of the prolonged gate into the inner monastery premises. The end of the wing next to the gate is an independent older part of the house, with oval barrel vaulting on the first and first floors. Older windows - maybe embrasures - are visible on the front with a keel. The north wing has one wing with an additional gallery standing on stone columns. There are no cellars.

Architectural and Historical Development:
The development was very complicated. The oldest is probably the eastern end part of the south wing. The location and the windows similar to embrasures indicate that the house used to be a bastion. Backing was made and the vaulting added during Renaissance. At that time, the buildings next to the street, from which we now have the vaulted spaces with groins, were already standing. Reconstruction that resulted in today`s appearance of the house based on the requirements of the monastery took place during the last quarter of the eighteenth century (1787). The gallery of the north wing was added later. 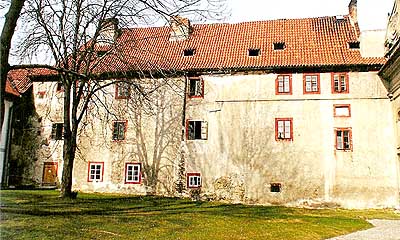 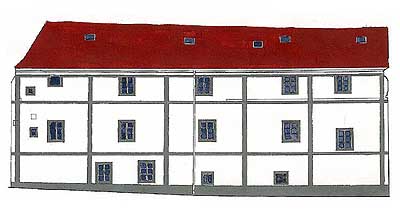 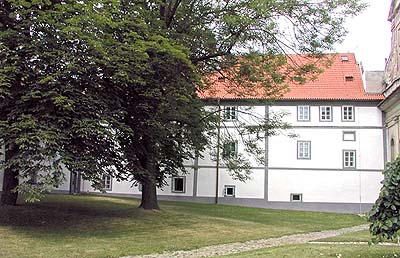 South wing of convent, development of south and north facade:
A one-floor building was built in the Middle Ages. It is said to have been used for economic purposes. A rough-smoothen plaster layer appeared in the south wall. Only some fragments of the smooth plaster were discovered from the Renaissance period. In the Baroque period, after the year 1738, the building was adapted up to the today´s form. The wing, a former granary, was rebuilt for residential purposes of the nuns.

The passage between the castle and monastery church may have been abolished in that period. The south and north facades were covered in a white-and-grey-coloured scheme. In the first half of 19th century the monastery was abolished and the north facade was covered in a flesh-coloured hue with some white-coloured plastic elements and then an all-surface green and ochre-and-white-coloured coat of paint was applied onto the facade. In 1970s the facade adaptation was done. Frame holes and ledges in the north facade in a grey-coloured scheme and a red-coloured scheme in the south facade. In 2002 they applied the lime paint onto the restored south facade, inspired with the Baroque finding situation. 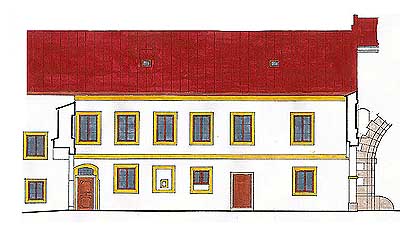 South-west wing, development of facade:
Originally it may have been a janitor house. From the Middle Ages only rough-smoothen plasters appeared in several places of the building. In the Renaissance period the facade of the building was newly pulled over with a smooth plaster with scraped window shams, perceptibly further to the build of a passage between the castle and monastery church. In 1738 the facade was adapted into the present form, including the gate into the monastery, without any coloured articulation discoveries. In the Classicism period there were some considerable changes of tha facade, and a white-and-ochre-coloured scheme was used. From the earlier periods only all-surface brown-and-grey-coloured, green-coloured, grey-coloured and ochre-coloured coats of paint were found.

Significant Architectural Features:
Exceptionally valuable is the former bastion of the Latrán fortification in the eastern end of the south wing.

History of Residents:
The first nuns came to the Clarrisian convent, established from around 1350, from Silesia in 1361. The convent was endowed by Peter, Jošt, Ulrich, and Jan von Rosenberg on April 24, 1362. The convent was relatively closely associated with the Minorite monastery in Český Krumlov, which was the convent´s neighbor and even shared the convent Church of the Body of God with them. The Hussite wars violently interrupted the peaceful life of the convent. In 1420 the convent fled from the Hussite danger to Freistadt in upper Austria. The next blow suffered by the convent was delivered by the Josefian reforms, which, among others, dissolved the order on February 5, 1782. Negotiations were held the same year concerning the further utilization of the convent buildings. The building was to be next at the disposal of a military garrison as an educational institution. In 1786 there was a proposal to equip the building for barracks, and four years later there was talk about adapting the building into an educational facility for boys and infants´ hospital. A military hospital actually did exist in the building from 1792, which was then changed in 1820 into barracks. In 1832 the building was equipped with flats for royal clerks and their widows. The building of the former Clarrisian convent is used for accommodations up to the present.