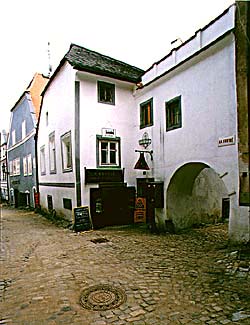 Description of the Building:
Two story building with a smooth-surfaced facade. The right side of the front of the house is interconnected with a vaulted carriage-way with an attic which is only a fragment of a more complex Renaissance spatial arrangement. The carriage-way leads to a door in the city wall through which the Vltava river may be accessed.

Architectural and Historical Development:
This is a Gothic house, reconstructed during Renaissance. Classicist modifications are responsible for the present appearance of the house.

Significant Architectural Features:
The house is not very valuable from the historic point of view. The lowered left side of the first story has two rooms with a high, segmental barrel vault, the right side has a barrel vault with caps. On the right side of the building, there is a two story wing with a separate access but of no importance. 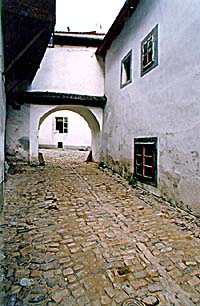 History of the House Residents:
The first known owner was master of the ordinance Bartoš. That was prior to 1540. Jakub Hanuš owned the house in the 1540s and 1550s. After his death, the widow Magdalena took over, followed in 1562 by her son Jaroš. When Jaroš died in 1575, the house was sold to hatter Jiří Schlossar. As he probably did not have any relatives who could inherit the house, the city council a year after his death (1599) decided to sell the house to Rosenberg equerry Ondřej May who then gave it to his son Šalamoun. He married Anna Tošanská in 1599 and let his wife\'s grandmother, the old castle laundress Barbora Douchová, live in the house until 1610. Court blacksmith Řehoř Schwighart or Švankort owned the house between 1622 and 1650, followed by blacksmith Mikuláš Strasse. There are two more court blacksmiths that owned the house - Matyáš Fischer from 1668 and Řehoř Khefer who lived in the house until 1739. The trade was at home here until the beginning of the nineteenth century. 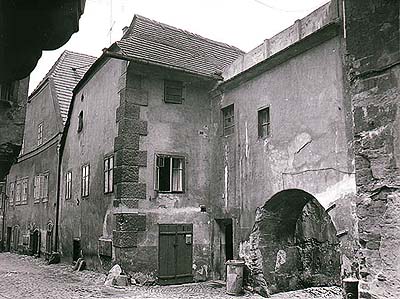