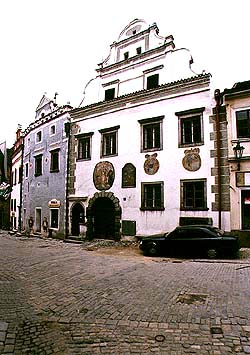 Description of the Building:
Two story building with a stone window lining and doors, volute gable and stucco hood moldings.

Architectural and Historical Development:
Large two story Gothic building, rebuilt during Renaissance, from when the front of the house is preserved. Two entrances into the house are lined with hemicycle quoin portals, the window lining is made of stone with a stucco frame around it, on the second story with stucco hood moldings. Two story oval gable is toped with an oval fronton. The gable cornices are decorated with sgraffito. There are cross and barrel vaults inside.

Significant Architectural Features:
There is a painting of the Madonna of Kájov with St. Šebestián and St. Vitus from 1861. There are two coat-of-arms - Eggenberg and Schwarzenberg - between the first and second story windows. The paintings were restored in 1984 and 1994.

History of the House Residents:
Tailor Rytr lived in the house at end of the fifteenth century and also during the first years of the sixteenth century. Huntsman Havel lived the house since 1510, while paying for the house in installments to Rytr\'s adult children František and Magdalena. Havel died in 1528 and it seems that no member of his family lived by then. Fisherman Matouš lived in the house from 1528 to the 1540s. In the 1550s, the house is owned by shoemaker Lorenc Tancl who died shortly before 1573. His widow Alena remarried in 1573 to Urban Hajný and then sold the Latrán house to baker Kašpar Ház who came to Český Krumlov from Linz. Kašpar owned the house until the 1570s. Carpenter Mert (Mertl - Martin) lived here after him. He built the truss of the Český Krumlov castle tower (see Castle No. 59 - castle tower) in 1580 and the truss of the Jesuit College in 1587 (now Hotel Růže, Horní No. 154); he died the same year. Mertl\'s brother-in-law Mates Brok from Plzeň, probbly representing the widow, mediated the sale of the house to Rosenberg court carpenter Oldřich Texner. During the 1580s and the first half of the 1590s, Texner also worked for the noblemen of Hradec. He is the author of exquisite floors and ceilings in the residences of both Houses. In 1598, he briefly owned also the house No. 11 in Latrán. He was still in Český Krumlov in 1602. Butcher Štefan Streintz lived here from 1651, followed by butcher Václav Kampfel. Teacher Martin Kalschinger owned the house from 1664 to 1717. Then tawer Valentin Zäch moved in. Meal-man Jakub Stumfol lived here briefly in 1816.