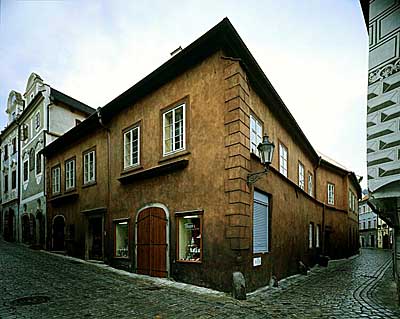 Description of the Building:
This one story building has got exterior walls that date from the 2nd half of the 19th century. The main facade, which is divided by five axes and the side facade, which is divided by eleven axes have got molded window frames Noteworthy elements on the facade are the early-Renaissance contoured cornices that top off both the stately window frames on the first floor and also the ground floor widows that were formerly display windows. There is an expansive entrance hall on the ground floor.

Architectural and Historical Development:
Like the three other corner buildings at this intersection, Dlouha 29 originated in the Middle Ages and is an extraordinarily significant and expansive building. It is possible that the building was originally two separated structures. In the Renaissance period impressive inlets on the Radnicni Street facade were added and the building as a whole underwent a complete Renaissance remodelling at the beginning of the 16th century that was based on the style of the newly renovated Krumlov chapel (Horní No. 159) The vaulting on ground floor is a product of Baroque renovations. The most recent alterations were made in the 1867 when the back wing of the building with separating walls, a stairwell, and a balcony were added. The facade of the building was also repaired at this time.

Development of facade:
In the Gothic-Renaissance period the white-coloured facade was framed by the grey-coloured rustic-work. In the Baroque period a large shop window was replaced by a smaller entrance. The early Baroque portal with ears was fixed into the front entrance. The facade was adapted in a grey-and-white and ochre-and-white-coloured scheme. The building was covered in an all-surface green-coloured coat of paint with white-coloured shams in the Classicism period. Around the half of 19th century the front was adapted again (current form) with the use of plastic window shams and corner rustic-work, an earlier coloured plan was left.

A ledge at the mezzanine level was walled with the symbol of the Rozemberg family, five-petalled rose. With connection of the side front restoration facing Dlouhá Street, the facade was adapted with the use of a brown-and-ochre-coloured scheme, and later a portal with a segment finish was fixed there at the left corner. In the early 20th century and pre-war period the building was covered with a brown-and-red-coloured coat of paint, and the shop window was restored in a modern way, in 1931. In 2001 the whole building was carefully restored, the facade preservation method was applied, as well as the restoration of the Classicism portal at the right corner.

History of the House Residents:
The first known owner of the building was a man named Vaclav Kyczhaypl in the year 1532. Rosemberg chancellor Vaclav Safar lived here from 1551. In the 1570s and 1580s, the building belonged to baker or gingerbread maker Hans Kohler who was succeeded in 1588 by goldsmith Erhard Friess. Less than one year later, he was replaced by brewer Kaspar Koch. From 1599-1626 a tax clerk named Kvirin Fischer lived here. After him, a paver named Jiri Puskart was granted ownership of the building as compensation for his service to Lord Eggenberg. From 1651 the building belonged to a brewer Martin Jager and then in 1680 to a brewer Jiri Wagner. The next owner of the building, Jiri Weng, was also a brewer. From 1742 until the beginning of the 19th century, the building was occupied by the Pleschner family. They were succeeded in 1822 by the family of Jan Kobinger.