The stove fitters in Vyšší Brod in the 16th Century

The stove fitters used to an elite among potters. Their name (kamnáři) came from Latin word caminus, what means a fire place. The first stove originates in alpine monasteries, where the living rooms had to be heated in different way than by an open fire. The first stove fitters came to Vyšší Brod from Austria being invited by monastery in Vyšší Brod. In 1530 lived in Vyšší Brod four house owners called the stove fitter, in German Hafner. Only Hans Katerhafner, "stove fitter grouch", is documented the stove fitting skill. The owner of house No. 21 was in year 1530 Michael Holzbauer, who has also been a stove fitter. One year later, on February 5 1531, has been in Krumlov Jan of Rožmberk arbitrating a quarrel between towns Vyšší Brod and Studánky. He forbad in Studánky such crafts as tailor, cobbler but on the other side he decided: "So let the stove fitters settled down in Studánky as well as the smith together with his journeymen provide their useful services to their customers, without complains from townsmen of Vyšší Brod, for ever".

The stove clay has been mined mainly around the Boršíkovský brook. To make tiles it was used by stove fitters not only from Vyšší Brod and Studánky but also by Austrian stove fitters from vicinity of Leonfelden. The tiles were made from plates rolled on smooth hard wood. Their size was 20x20 cm. To the plates were on sides attached "štumfy" with holes through which were during construction of stove spaced wires so the positioned tiles did not part. After a set tiles were wiped out by the wide knife. Glaze powder called "flcavka" was mixed in water and tile was glazed by it. Once the tiles dried, they were decorated by tapping and watered by red lead. The red lead burnt out during baking and tiles got the glitter. For baking the dried spruce wood was used. The tile stoves had had three draws for better use of heat. 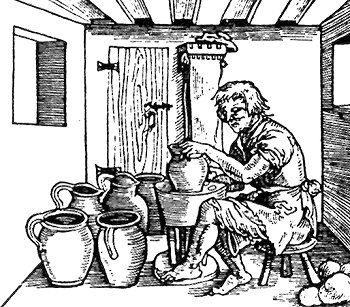 Before a fire of monastery in Vyšší Brod in 1536 created its abbot a document which sanctioned, "that you have been offering your services in right way and you were talented and free in your craft", as was recorded on September 29 1554. On this day, celebration of St. Michael archangel, published the abbot of monastery in Vyšší Brod, its prior and convention the privilege for stove fitters from Vyšší Brod and Studánky, which is confirmed even with seal of Vilém of Rožmberk. We learn from this document that masters of stove fitters were in the moment also Michael Holzbauer and Štefan Katter from Vyšší Brod. The first one was a townsman in today's house No. 21 and the second one was the mentioned stove fitter grouch from house No. 92. There were eight masters in Studánky: Urban Geyem, Hans Leotol, Georg Haffner, Andre Haider, Amand Grimoalt and Martin Schmuckberr.

In the guild order are articles about intaking the journeymen, way of exams and issuing the documents about successful training. To become a stove fitter had the learner study three years and at the end he had to make an master piece, what usually was kettledrum for brewing of beer, couple of cauldrons with top and tile stove. The guild order concerns the intaking of journeymen and the "master feast". Very detailed is system of fines and fees, always measured by pound of wax. The order stated that after training the journeymen received from master diploma and new outfit. In case that the journeymen wanted to "wander for weeks", he had to tell about it to his master at least 14 days in advance. The same term was used in case that master wanted to discharge his journeyman. The worst wronggoing was if one stove fitter sold tiles to another one. Privilege allowed stove fitters to have their own symbol and to use their seal.