The Fortified Settlement of Český Heršlák

The fortified settlement of Český Heršlák /at present days the settlement of Horní Dvořiště/ came to existence after the settlement of Horní Dvořiště had been founded. "The first written document about Heršlák comes from the year 1289 when two brothers Čeněk of Doudleby and Dominik of Pasovar tithed from it to the monastery of Vyšší Brod". The fortified settlement of Heršlák was located along the Bohemia-and-Austria border towards the market settlement of Horní Dvořiště. The archaeological research done during the construction work of the railway line České Budějovice-Linz in the 19th century proved that an old terrestrial trail bad been there many years ago. A deformed prehistoric necklace made of copper /displayed in the Prague National Museum, stock number 50.814/ was found in Český Heršlák. It is a stick with a ring-shaped section rolled up into an open circle shape with a coiled up end. The other end of the stick is broken and dark green patina is cracked here and there. 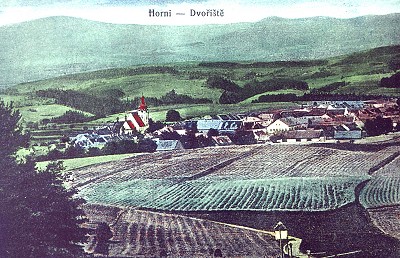 The stick found near Český Heršlák represents a form of metal material dating from the late Bronze Ages. It might have been a part of a bigger mass discovery. In a book called Bohemia dating from the 19th century is written: " Heršlák is an old settlement where the first known occuppiers came from the family widely spread in South Bohemia. They had a man with a drawn sword in their emblem. Heršlák had quite a big importance during all periods because it was a boundary castle. The families of Doudleby, Heršlák, Zinespan, Řevnov, Pouzar of Michnice and Sudlic of Jílovice shared the same coat-of-arms (a man with a conquered sword). Its seal is given here. Augustin Sedláček adds that the fortified settlement was surrounded by the deep moat where fish were bred." There is a nice description of one occupier´s behaviour:

"Beneš Macuta of Heršlák became well-known and famous all over Bohemia when his father was still alive. People used to frightened their children while talking about him. The first written statement dates back to the year 1390 and is very mild. But later criminals on tenter- hooks talked about him while being asked. They said: His grooms stole three cows from a miller of Myšlany, one of them belonged to Macuta, and many other thefts happened by his order. But the family of Cáhlovský got ready against them. Ondřej of Polheim, a district administrator in Cáhlov, had captured him and later let him go because Lord Jindřich of Rosenberg spoke up for him. He came back to Bohemia and continued stealing. He is said to have been a robber on roads". In 1409 The House of Rosenberg managed to capture him again , and he admitted everything he had done. Four pages are inscribed in a hangman book. They put him to death.