The weaving guild of Vyšší Brod 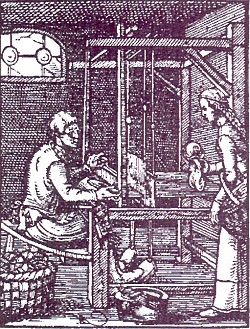 In the old Germany chronicle of Vyšší Brod is written: Besides cereals, flax ranks among well-grown utility plants. Growing flax dates back to the oldest period. After reading this statement, I suggested looking for Vyšší Brod weavers´ history. Flax was usually sown at barrens in May or in the beginning of June, and ripened for about thirteen weeks which was enough for the short Šumava summer. In 1506 the weaving guild of Rožmberk was established at the Rožmberk Mansion. In 1531 there is an evidence of the first weaver in near-by Studánky. A number of Vyšší Brod weavers rose gradually. On 10 July 1568 Vilém of Rožmberk gave the assent to the independent weaving guild, and the Vyšší Brod Abbot called Johann issued the privilege. The privilege contained 30 regulations. The first regulation is: Two sworn master weavers undertake responsibility for obedience and complying with the regulations. Who wants to become a master weaver must have good customers, ought to be religious and born chastely, and must perform well his craft and present his birth-certificate and certificate of apprenticeship, promise to comply with regulations. He must also pay three sixty-groschens and ten vessels of wax. Only weavers´ children born in Vyšší Brod and their widows are freed of it.

Other regulations are made more accurate, for example, how a weaver should act, how to settle enemy forces weavers, fines are also mentioned. Regulations No. 8, 9 and 10 are interesting: The one who lost his yarn or sold it and went back on a pledge is said to leave his craft till he meets his obligations again. The one who does not do his work properly or who asks the same amount of money for easy work as for difficult one will be punished. The one who will be caught while stealing, will be eliminated from the guild. Those simple but very state statements do not leave anybody in the dark how to be interpreted. Everyone who wanted to have a piece of linen woven usually brought his own yarn and paid just for work. In 1562 Petr Ondřej Mattioli wrote in his Herbarium: First a weaver warps a hem onto a warping machine, winds onto pirns and makes a warp then winds a yarn and weaves a piece of linen. Sometimes he is in a jolly mood and sings, and sometimes he is cross and scolds. As it is known from the Vyšší Brod weaving privilege, anyone who wanted to become a weaver needed excellent references, had to be born chastely and promise to get trained for four years. He had to deposit five sixty-groschens, and pay six vessels of wax. After serving an apprenticeship, he went for a journeyman´s journey for two years. 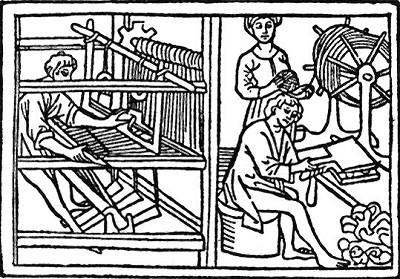 The first Mayor of Vyšší Brod, who was the Vyšší Brod Mayor from 1608, called Simon Malschinger ran a large linen shop. Petr Vok of Rožmberk was one of his customers. It is evident from his order of 10 November 1610. Some other well-known Vyšší Brod weavers are Bartl and Thoman and Michal Leitgeb. In a tax rule dating from 1652 - 1656 is written that people earning their living working as a weaver are almost in every village and lonely houses of Vyšší Brod. The visitation commission who completed their work at the Vyšší Brod mansion on 27 October 1653 mention eleven people working as a weaver in Vyšší Brod, one weaver in villages of Hradový, Slupečná and Studánky. In 1653 I found nine people working as a weaver among the house owners, and ten weavers in 1712. There is a noticeable statement dating from 1599 referring to tithing to the Vyšší Brod vicarage (Vicar Martin Nach), for example, peasant Gregor of Petřejov tithed ten sheaves of flax and one rooster. In the villages of Bystrá and Kamenná had to tithe cheese, goose and one or two sheaves of flax.