Beer and breweries in Vyšší Brod 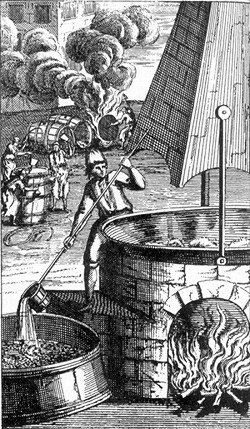 In the Midle Ages beer was not just a drink, people used it as a form of relatively cheap and vivid food. At the begining beer was made at home in primitive home breweries which consisted of pan or caldron. Vyšší Brod brewery in cistercian monastery was first indicated in 1380 and beer there was made by monks. In the first half of 15th century they mentioned monastery brewers Mikuláš, Jakub a Friedrich. The Vyšší Brod pastor who was not a monk wrote filed with regret: "The circuit of Vyšší Brod parish is extensive so the local pastor has to make all efforts, while monks beside the forest are doing very well. There barley juice is already sparkling and flowing into cellars."

The right to brew beer was one of the economic privilege of every burgess. It's profitability was protected by "mile-law" which protected malt houses, breweries and pubs which did not belonged to burgess or noble people, to grow around the town. The Vyšší Brod monastery abbot Christodor Knoll gave out The privilegium on 24th of July 1524, with consent of Jan of Rožmberk, to all burgess and residents of městys of Vyšší Brod, There it is said in fifth article: "It is not allowed to sell or offer any beer or to make malt by habitants of vilages 1,5 milage from Vyšší Brod which belong to Vyšší Brod monastery. They can brew as much beer as they need for their personal and family existence only."

But on 5th of February 1531 Jan of Rožmberk resolved problem between městys of Vyšší Brod and Studánky about brewery rights as it follows: "We allow graciously to all wealthy and poor from Studánky and we graciously agree, so they can brew beer and make malt in their houses for their personal needs. They are allowed to brew beer for their guests as well. This is to be for evermore, with no complains or misunderstandings with Vyšší Brod. But it is forbidden for them to draw or offer beer for sale." Artikuly (documents) written in 1540 to reeves and vassals emphasize that all subjects are allowed to brew beer in any amount "for their personal needs and for their grooms, but noone can draw beer or sell it, only with special privilege."

This principle was held in Bohemia since the reign of king Jiří z Poděbrad and it was proclaimed on Bohemian congress in 1479. Till then burgess did not need special written approval of nobles for brewing beer. They just had to pay regular fees. For brewing beer it was so called - provarné, for taping beer - počepné or šenkovné, if they had a pub thay had to pay - pokrčmé and for exposing beer for selling it was - posudné. These payments from beer were welcomed benefits for cistercian monastery treasury. That's why monks did not intercept burgess to expose beer for their villages on the contrary they imposed to villagers so they had to take beer only from them and they were not allowed to consume foreign beer. Normally they were selling 1 pint of beer for 2 halers (14 halers = 1 rap). For 2 halers you could buy bread or 14 eggs. Wine was the similar price as beer at that time. They used to brew mainly "dark" beer made of barley and it's consumption, as we are used to in Bohemia, was very high. It is written in notes of Březan's Life of Vilém of Rožmberk: "The great consumption of beer in Bohemia(in 16th century about 200 litres per year per person including children) was a result of consuming beer as one of elementary foodstuff, word for word a liquid bread." 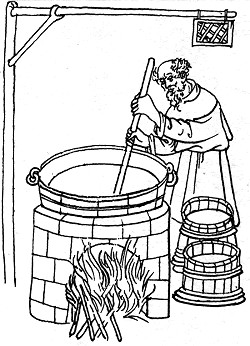 The original anarchy of home breweries, where every citizen had a right to brew any amount of beer in his house was replaced by specific rule with which the citizen could brew only when it was his turn. Since the begining of 16th century "Brewery houses" were established in Vyšší Brod, where brewers were brewing beer for every single citizen who had a right to brew beer. The first of Vyšší Brod brewers was the Mälzer family (Mälzer means in german language brewer). The first member of this family mentioned is Jakob Mälzer in 1525, 1530 and 1534. Dark or red beer was brewed in monastery brewery as well as in town brewery. It was made of barley with light bitter flavour and people used to say it was good for purification of blood. In monastery brewery they used to brew so called "pale beer" for the abbot and special guests. This beer was made of wheat, it was "thick", not to sweet or bitter. All raw materials they needed for brewing beer were at point including barley which was grown on Olivet mountain and in Hvězdné valley. In 1576 Vilém of Rožmberk is requesting the Vyšší Brod abbot to relinquish the tap-right forever in many villages which belonged to the monastery to improve his income. The monastery chronicler noticed: "this lord of the Romžberk suffered from absence of money."

Since 1577 the town brewery in Vyšší Brod had to pay lump-tax 60 kop of meisen groschen to the monastery every year. The Vyšší Brod abbot Georg II. Taxer established a new monastery tavern in Vyšší Brod in 1584. On 17th of August 1597 the Vyšší Brod abbot Michael Fabritius obligated to Petr Vok of Rožmberk not to build any new breweries, mills or lakes on the monastery grounds during his lifetime. It is said in document written by Petr Vok of Rožmberk in 14th of May 1608 in Třeboň that all privileges of městys of Vyšší Brod are approved and extended. In article number 6 there is written about beer: "For next time and for ever all town coouncellors and burgess of our little town of Vyšší Brod are allowed to brew red and white beer, to make malt and to sell beer as they wish to. We and our progeny will never inhibit them from their rights. Neither abbot nor prior will ever complain. But it is not allowed to brew beer or to make malt for anyone who lives around 1,5 mile (czech mile = 7,53 km) away from our monastery."

In 1628 the town council of Vyšší Brod paid 100 rýnských zlatých (rhine gold coins) as so called "posudné" for beer every year. Between 1627 and 1642 the chef-brewer of town brewery in Vyšší Brod was Georg Kaidl. On 28th of March 1636 the Vyšší Brod abbot Georg II. Schroff bought a house "Panský dům" from the Vyšší Brod burgess Georg Hammermüller for 900 gold coins and he changed it into a tavern. The first landlord of this tavern was Michal Schulz. Tne next tavern in Vyšší Brod was a property of town brewery - house number 79 where was a Johan Mader as a landlord between 1653 - 1690. In 1651 during the life of abbot Georg Wendschuh the monastery brewery was modernized and a new ice-house was build.