History of Mills and Saw Mills in the Český Krumlov Region 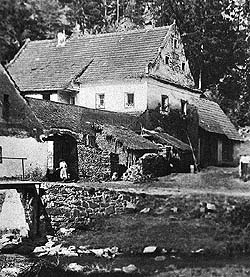 An inseparable part of people's lives in the Middle Ages was the regular visit to the mills. Towards the end of the 16th century the majority of small mills were the mills of serfs, which had a single mill wheel and quite a small output. The bigger mills of the landlords, which were looked after by an employee of the estate, who enjoyed great respect among the people, were less frequent. Up to the start of business trading by the landlords and more detailed written information from the middle of the 16th century, it is not possible to say anything further with regards to the mills on the estates of the Český Krumlov region. The archaeological studies of medieval period present the only possible source of information for the future.

From the little information we have from the first half of the 16th century we can assume that some of the estate mills were (like some of the river sections) rented to interested parties (with a six month term of notice) for a set sum, usually for a period of 2 to 3 years. The increased production of beer also brought with it increased an demand on the control of movement of wheat from the estates, and made the Rosenberg estate reorganize the widespread milling network within the Český Krumlov region. 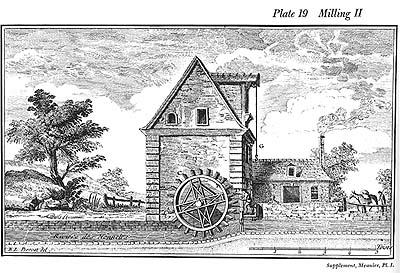 This widespread event, which lasted from 1589 to 1602, preceded an unusually efficient registration. Its result gives us the first possibility to look into the structure of the mills within the Rosenberg dominion. We can assume from this, that before 1590 there were 94 official mills operating in the region of Český Krumlov, they had 140 mill wheels, and 36 serf saw mills. Only 6 mills belonged to the Rosenberg family during that time. There was at least one mill in 17 counties (60%) and people from other counties had to take their wheat to the neighbouring county. During the period 1590-1602 the majority (nearly 73) of serf mills were bought out by the Rosenbergs, and later closed down. At the same time a plan for building of large mills of higher capacity was prepared. The demanding alternations of older buildings and new mills were mostly under the direction of Italian builders who at that time worked on all mansion estates, including the castle of Český Krumlov. The most famous one was Domenico Benedetto Cometta z Eckthurnu. 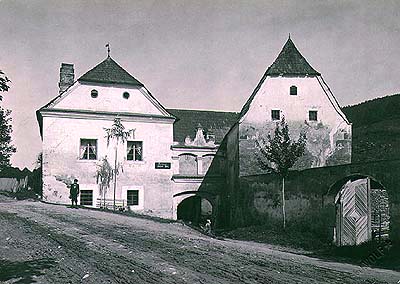 At the turn of the 16th and 17th centuries there were 20 new or rebuilt estate mills and saw mills , which noticeably changed the "wheat policy" of the landowners. These buildings of the Late Renaissance style, had from three to seven mill wheels (amongst the biggest for example was the mill "Olšina" with seven wheels or the mill "Krumlov" near the castle lake with six wheels) and formed together with the estate breweries one of the most dominant aspects in the land and they survived not only the Thirty Years' War but the whole 17th century. Apart from the above mentioned mill of "Olšina" by the lake with the same name, and the mill of the Krumlov castle, we can mention for example the mill near Horní Planá, mill "Zátoň", "Matlův" mill near Slubice, a mill near Svéráze or "Moučkův" mill near Rájov, "Semrlovský" mill near Chvalšiny, "Hrbkův" mill near Brloh, "Zikmundův" mill under Kremže, "Rudlarův" mill near Mezipotočí, two mills near Hořice ("Homrmíl" and "Renmíl"), the mill of "Březovice" and "Slonův" mill near Březovík.