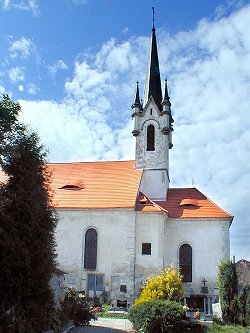 Church stood here already before a year 1259, parish has been here from 1. June 1259 and from the year 1264 it was under a patronage of monastery in Vyšší Brod. First known Vyšší Brod rector is Stephan "plebanus de Altovado" from the year 1339. In 14th century the deanship Doudleby paid 18 raps as a papal tithes. During Hussite period was the parish church of St. Bartoloměj destroyed and its restoration came as late as in 16th century. For example in the year 1591 got the church new font and in the year 1581 a bell from bellfaunder Paulus. In the year 1598 is here introduced a first known organist Matthius Zoph. This family has had here a function of organist until the year 1634. From this year the function of organist exercised teacher from parish elemental school.

In the year 1643 was parish church newly reconstructed and the wooden ceiling was finished. At the same time was on 25. October 1643 newly ordinated the altar by heel Georg Wendschuh. In the year 1715 was added on a present sacristy. On the year 1761 was obtained new baroque altar, which was consecrated by heel Quirin Mickl on 28. June 1761. On wooden altar hangs among posts the picture of St. Bartoloměj. At the sides of posts there are statues of St. Bernard and St. Benedikt in pontifical canonicals. Upon the entablature bow two angels to Virgin Mary. Altar-piece of St. Bartoloměj painted in the year 1858 painter Schrams. On northern lateral altar is a statue of whipped Christ from 18th century. The crib gave to church in the year 1777 skipper of an artillery regiment Franz Funfkirchner. New steeple is partly a project of engineer Karel from the year 1864. Painting of church windows is from the year 1904 and electric light came to the church in the year 1905. Church stands in the middle of cemetery in upper part of the square. It has a rest of original square chancel without supports and double triumphant arch, which serves as the tower base. Westward from arches is a tetra-field ship and northward stays a sacristy. 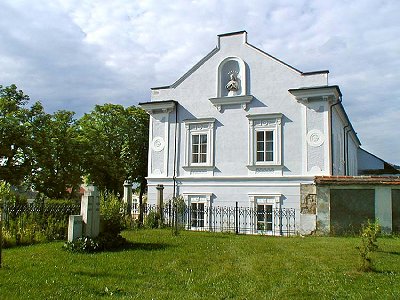 Building of parsonage beside the church of St. Bartoloměj has on the usher beam an era 1489 and it was rebuilt in the year 1658. In the year 1850 new outbuildings of parsonage were built and "parish court" itself was constructed in the year 1866 by an engineer Karel. The elementary school at local parish exists from the year 1530, when is here introduced teacher Nikolaus. Extinction of the parish school occurred in the year 1775, when the state schools were legalized. Already on 29. April 1659 is at the parish Vyšší Brod introduced the Brotherhood of Holy Body, which received the indulgences from popes Alexander VII. and Inocence IX. This brotherhood was unmade by Emperor Josef II. and its possession was confiscated. On 1. May 1747 brought twelve pious pilgrims, citizens of Vyšší Brod, "a statue from Wies in Bavaria near Steingaden. Many processions wandered once to this statue into Vyšší Brod. Statue was bought from a farmer's wife in a meadow". Marian worships were installed in the year 1854, the Rosary brotherhood was the successor of the Brotherhood of Holy body in the year 1893 and the Congregation of Maidens in the year 1910. 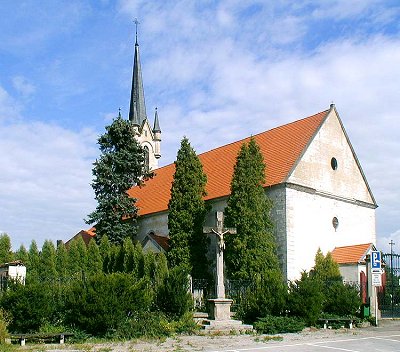