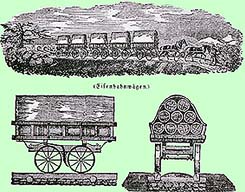 History:
The main reason for the building of the railway from Linz to České Budějovice was the transport of salt from Salzburg to Bohemia. The salt was transported from long ago on the Travna and Dunaj rivers to Linz, where it was transferred to teams of horses, to take it across the Šumava ridges to České Budějovice and to the Vltava river. 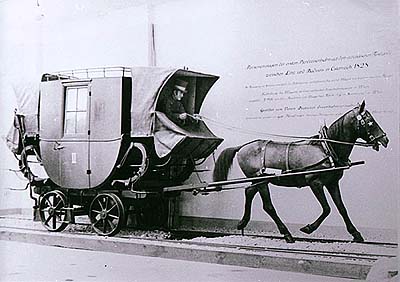 The idea of improving this transport by the building of a canal between the Dunaj and Vltava rivers already emerged in the Middle Ages, but only at the beginning of the 18th century, the onset of the industrial revolution brought sufficient technical and economical conditions for the realisation of this project.

The revision of the existing projects was given to the director of the Technical Educational Institute, František Josef Gerstner, in 1807. He, after a careful study of the terrain and the newest technological trends submitted a project for the building of the horse-drawn railway. At that time railways were common in England, but on the European continent this was the first of its kind. The project did not inspire confidence and fell into oblivion.

It was not until 1820, that Gerstner's son, František Antonín Gerstner, then a professor at the Vienna Polytechnic, was entrusted to continue with the project. He took this project seriously, and went on a trip to England, so that he could familiarise himself with details of the building of railways. There he also found, that the future does not belong to horses, but to steam engines.

After his return, Gestner prepared a project, which was granted a building and operating permit by the Emperor in September 7, 1824, for the "iron and wood railway" and the building commenced in the summer 1825.

The building of the railway was a great lesson to its builders, and during the course of construction many changes 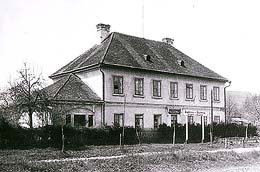 had to be made. For example the building of embankments, the depth of draining canals or the gradient of the slopes in excavations. The extravagant way of building embankments led to a massive overspending on the project, and ended by the departure of Gerstner from the contract in 1828.

At that time the Czech section of the track was complete. The construction on the Austrian side was taken over by Matyáš Schönerer. By utilising the experiences acquired, he routed the railway in such a way that the costs of finishing it were minimal.

On the railway there were several way stations for changing horses. The passenger trains were leaving regularly, once a day at 5 o'clock in the morning from both terminal stations. They crossed at midday in the highest station of Kerschbaum, where they had an hour break for lunch in the first railway restaurant in Europe. The journey took 14 hours.

The steam trains came into operation on September 1, 1872. The north Gerstner's section of the railway could be used for locomotive operation with some alterations, but the southern section, which was built by Schönerer, had to be totally rebuilt.

In 1970 the remains of the horse-drawn railway were announced as a cultural monument. 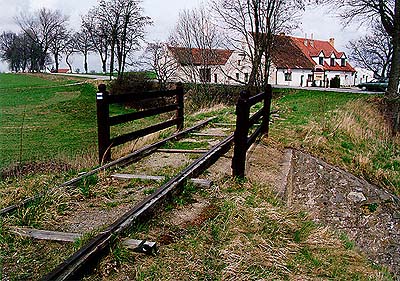 Constructions Preserved:
Regarding the fact, that nearly the whole Czech part of the railway was taken over to steam operation, not much of the original track remains:

Holkov - The station building with a stable. The first change-over station in the direction from České Budějovice was Holkov.
Velešín - A stone arched bridge. A track, which is a copy of the original railway surface from 1828, leads over this bridge.
Bujanov - A former station building.
Pšenice - The watch house and remains of the railway track. 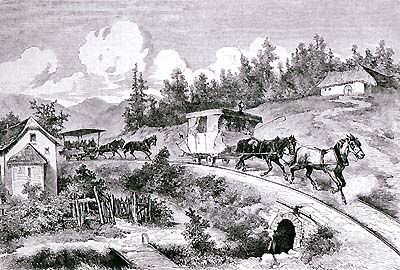