Written by Karel Čapek: Masaryk´s world popularity is not topical because it is standing. Every man can hear of Masaryk all over the world. He became a part of the educated world. While 999 statesmen and rulers out of 1,000 are just names for historians, "Your Masaryk" will be heard in one hundred years´ time. On 14 November 1918 the revolutionary National Assembly held its first meeting in Prague. Prime Minister Karel Kramář said: "All bonds with The Dynasty of Habsburg-Lotrin were severed. The Dynasty of Habsburg-Lotrin lost the right to the Bohemian throne. We are free and independent. We declare our country Czech-Slovak Republic to be free. Please, elect Tomáš Masaryk as the first President of Czech-Slovak Republic." All those present stood up and clapped their hands thunderously. Karel Kramář added a memorable period: "I declare Professor Masaryk to have been elected President of Czech-Slovak Republic in one voice."

On Saturday, 16 November 1918 New York newspapers published the information about electing Tomáš Garrigue Masaryk as President of Czech-Slovak Republic. On 20 November President Masaryk got on the ship called Carmenia in the port of New York. He came back to his native country through London, Paris and Italy. His daughter Olga accompanied him all the way. On 16 December 1918, 3.00 p.m. President Masaryk got on the special military train to Prague in the city of Battaglia (Italy). The train reached the Bohemia-Austria border (Horní Dvořiště) via Vicenza, Verona, Alla, Trento, Bolzano, Brixen, Frnzensfeste, Toblach, St. Michael, Selztal, St. Valentine and Gaisbach. On Thursday, 19 December 1918 Members of National Assembly and Ministers came to the city of České Budějovice by special train and then towards the border, where the triumphal arch was placed. Soldiers of 33 regiment (our legionnaires from Italy) waited to welcome President Tomáš Garrigue Masaryk in Horní Dvořiště. 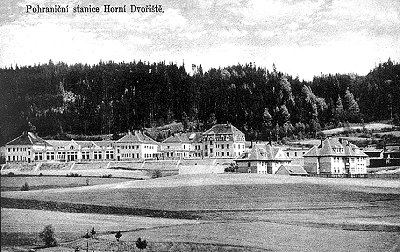 On 21 December 1918 the National Newspaper wrote: "The first President of Czech-Slovak Republic Tomáš Garrigue Masaryk reached his country on 20 December, at nearly 1.00 p.m., after he had had to leave the country as a political emigrant four years ago, on 19 December 1914. The train carrying President Masaryk drew into the railway station. All those present were very excited. The National Assembly marshalled according to political appurtenance. They were playing the national anthem when the train appeared. The train consisted of two carriages of service, three saloons, four 1st class carriages, five ordinary carriages and three freight-cars. Seventeen carriages altogether. President Tomáš Garrigue Masaryk said: "If we had not worked hard, we would not have succeeded. I am sure that we will keep it, complete it and make ourselves perfect in it. Much work is still to be done. Work might be even harder than it has been so far. I ask every man to co-operate. He looked at the honourable company, got on his train followed by Members of National Assembly and continued his journey towards the city of České Budějovice.