The Elementary School in Frymburk

There has been a school near the Frymburk parish since 1474. The information comes from German sources where an anonymous village schoolmaster is mentioned. In 1521 one of the Frymburk plot is called Schulweis, but the village schoolmaster´s name is missing again. Kašpar Libewein was the first known Frymburk schoolmaster in 1586. We know his name because he was also the scribe. Being a schoolmaster and a scribe used to be usual and it was a matter of course that he was a bell-ringer in the church at the same time. His quality was appreciated according to his work as a bell-ringer. He had to perform a function regularly and ensure hymn-singing.

During the year 1686 and 1739 the children were taught in the house No.76 called Liedl-House. In the land and duties register dating from 1598 two men by name Liebewein (Hans and Mathes) are mentioned among 36 inhabitants living in Frymburk. It is possible that schoolmaster Johan Wilhein Ortman married into The House of Liebewein. Johan Andreas was the youngest schoolmaster of the Ortman family. He began teaching in the house called Twerafer-House No. 30 in 1739. The first brick-walled ground-level school building with the shingled roof was built shortly after the year 1739. It was built very near the current houses No. 35, 36. The school was detached from the house with a narrow alley. The pupils were using the alley while going to the river in order to defecate onto the dung-heap. There was only one classroom and a schoolmaster chamber. 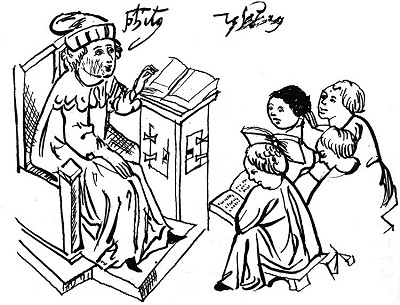 Only the boys of wealthy citizens were allowed to go to school. The girls were excluded from school. The social and material status of a schoolmaster was almost equaled with the standard of a shepherd. The schoolmasters raised various fees from the pupils´parents in order to better their conditions. For example, they charged for sharpening a quill and using candles in winter. The school children were sitting on the floor. During the winter aech pupil had to bring a stick of fire-wood every day. On 7 December 1774 the first Educational Rule was issued. It is considered as the beginning of the compulsory education. It was accepted in Frymburk on 3 December 1777 when the new school year began.