History of the hydro plant Lipno

Mostly basic calculations had shown, that upper strem of Vltava is naturaly suitable for using of energy of running water. Riverbed at Lipno was 705 m above sea level, at Vyšší Brod 560 m and at Mělník by inlet of Vltava into Labe only 155 m above sea level, so the first short part incline of 145 meters hid great supplies of water energy and other 322 kilometers of river has level difference just 405 meters. Above Lipno flew Vltava only with slight incline, which enabled creation of large reservoir with small swell. This condition and propitious consistence of soil from granite and gneiss were propositions for construction of such aquatic work. By using of gradient of Vltava at these areas and by managing of water volume was calculated, that dam can give out around 150 milions kWh. Converted to brown coal, which is used at steam plants, it is about 75 000 tons. Hydro plant with reservoir has another advantage: it can supply current in time, when the eletricity consumption is highest, with infinitesimal production costs and during short term. 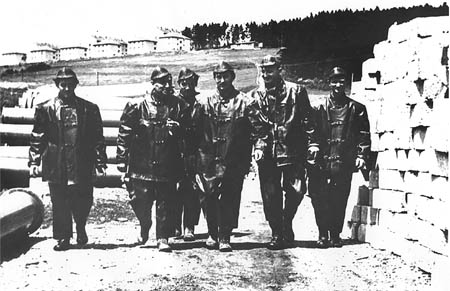 Year 1951
In the first months of year 1951 it was started with construction of buildings important for constructing the dam itself. It was in time, when the whole project of dam construction has not been ready yet. Masons from the Surface construction České Budějovice came first. They built near planned dam wooden houses for durable workers and volunteers and gave face to future housing estate in Lipno. Stores, garages and workshops were built. Shortly after that came clearance of smaller and larger forest areas as well as the one of small groves, solitaires and avenues along roads, which were supposed to disappear under water. From area were driven away thousands of trucks filled with wood. Houses and other objects, which were supposed to follow destiny of roads were removed. Couple settlements disappeared as well, village Dolni Vltavice and part of Frymburk. Supply roads and paths were constructed on all sorts of soil. The whole valley of Vltava u Lipna became one great workplace and in past quiet places changed themse rapidly. 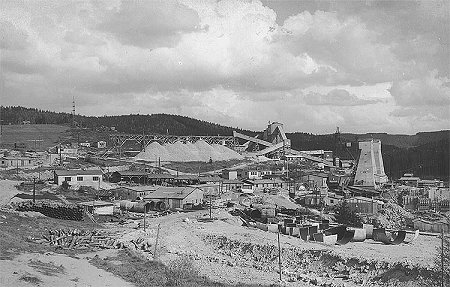 Year 1952
In year 1952 started construction of dam at the suitable place after carrying out the geological research. Purpose of this dam was to stop water of the whole lake and let it flow according to needs of power plant. In horizontal axis of dam were dug twelve schafts with depth twenty meters till workers met hard rock. From this depth was the rock stabilized by injections of concrete milk pushed in under high pressure so basis of construction became solid. Figure about extent of works in schafts gives information, that from each of schafts had to be carried away 600 cubic meters of soil, boulders and crushed rocks. Against leakage of water under dam had to be constructid massive concrete wall. It was done with caissons - steel boxes with weight of sixty tons. Caisson workers freed soil and boulders from caisson by which it was undermined till it sat in required depth. At the end was chamber of caisson filled with concrete. Filled caisson reached up weight 230 tons.

Year 1954
After first years of problems and shortages continued construction in year 1954 in faster tempo, although it can not be said that problems have shrunk. Plan was filled even with less workers and with high level of river after long lasting rains. Flood has not caused much damage on dam. Workers released in time construction from water by transferring it to balance tank at Vyšší Brod, so even during rains was on construction carried out normal working. In summer of same year was finished construction of concrete manufacture, which used to be one of the best automated device of this kind in republic.

It was hardly worked at penetration of two press schafts with diameter 4,5 meter deep 180 meters. Tunnel workers were digging deep under surface from Vyšší Brod to dam, reached in half of July 1954 lenght of this tunnel 1300 meters. On sloping tunnel was reached depth 41 meters.

Year 1955
After years of problems and hard work arrived first success: at half past two a.m. in December 30 1955 builders of Lipno brought Vltava into new riverbed. Water left its original riverbed and begun to flow through gravitational blocks, which was concreted during fall of 1954. 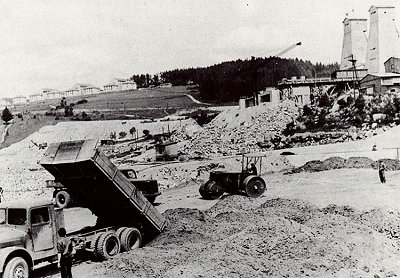 Year 1956
Shortly after that before midnight of January 10 1956 met tunnel builders digging from opposite sides and so connected both tunnels from Vyšší Brod and Lipno. Work of technicians and ingeneers was so quality that during connection of more than three kilometers long tunnels appeared almost none deviation. Excavation of tunnel begun on May 13 1952 in direction from Vyšší Brod. In 1954 rwached progress 2,72 m per 24 hours and in 1955 more than 3,74 meter. Maximal daily progress was 5,80 m. In 1955 works on opposite tunnel started from Lipno. Originally was rock drilled without usage of water what caused health problems of workers. In short time was this kind of drilling replaced with more suitable. Manual loading of boulders was replaced by automated one. Shooting stopped being performed by quickmatch and electric shooting was introduced.

Year 1957
In half of January 1957 started extraction of core in underground part of hydro center, after finishing came concreting and montage of turbines. Under the hardest working conditions were extracted and driven away thousands of cubic meters of rock. Extracted area was concreted and infixed by several hundreds of anchors, which eliminated possibility of damage and life risk by unexpectated shifting of layers and smothering of area of future power plant. With anchors, which planner subscribed had not during building of Lipno any experiences and had to try number of possibilities how to get concrete into the end of thin and long bore. During testing anchors could not be pulled out of holes even by tug of 26 000 kg.

Due to construction of Lipno hydro planthad to be built smaller dam called Lipno II., which catches water drained from large dam during working of top power plant. Catched water in this balance reservoir above Vyšší Brod can be evenly drained into the riverbed. Reservoir is 1,5 km long and about 200 meters wide and about 10 m deep. Construction of reservoir was slowed down by cleaning works after flood in summer 1955, when the reservoir was filled by 800 cubic meters of send and mud. At beginning of October was finished concreting of gravitational block of reservoir and it was deposed in it about 25000 cubic meters of concrete. Than was Vltava´s valley closed by surface dam with functional gravitational block with dam 11,5 meters high dam and above bottom of valley and at balance reservoir Lipno II. begun montage of the firstLipno´s turbine - Kaplan´s one. New power plant at balance reservoir came to working on spring 1957 and its year´s output is 12 milions of kWh. 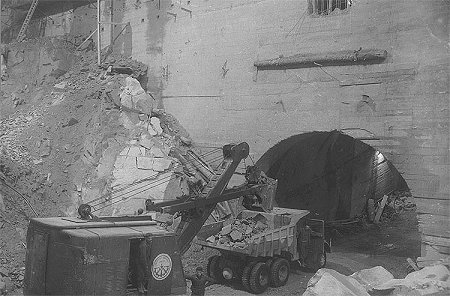 Year 1958
Lipno´s dam was ready actually on fall 1957. Continued works on stone part and two blocks were concreted. 1957 spring water was supposed to be caught in this reservoir. Surface dam at Lipno is above bottom of valley 28 m high and 282 m long, closed by gravitational concrete block. Its volume is about 270 000 cubic meters of several sorts of soil, which were all extracted at the building site. During peak worked here eight diggers, three bulldozers, two rollers, 50 tippers Tatra and couple of powerfull dumpcars.

Lipno dam was supposed to be filled from March 1 1958. It was the last work on dam. Buildings, which stood in flood zone were quickly demolished. Bridges were removed. People worked in winds, cold and snow. Intent to fill reservoir slowly could not be carried out, because of sudden thaw. Water from melted snow begun rapidly filling the reservoir. 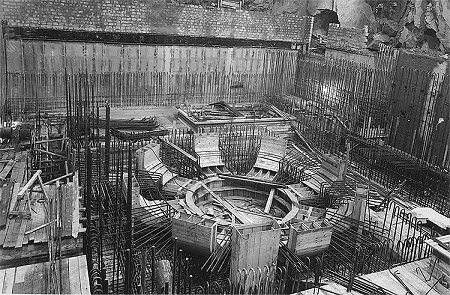 On February 17 reached water level 715,15 m and dam stopped about 12 and half millions of cubic meters of water. Level was still raising. Outlets of gravitational block were open to reduce volume of water to put on dam the lowest burden. Although most of preparatory works were done in time, flood caught workers unprepared. In Frymburk was disconnected connection between both banks, because inroad to bridge from right side was under water. To protect bridge from damage by ice, floes had to be blown out during night of February 16. And so could workers on Lipno on February 17 1958 at first time see, how is going the Šumava´s sea look like. On February 20 reached level up to 716.35 m. Water was drained only on necessary purposes for energetics on lower part ofVltava. When finally all snow around Lipno melted reached the water level to 717,40 m. Volume of reservoir was several millions of cubic meters of water. Water spread wide among forests on hillsides looked like that lake has always been here. Along shores appeared lot of places suitable for swimming. And by this time started on Lipno very first season. Lipno became recreational center.

In beginning of of August 1958 was ready block No. 2 for montage and also begun montage of the first turbine. Mechanics of national company Elektrostroj from Brno transported on September 1 via sloping cargo lift to underground first parst of the Francis´s turbine. This part had weight about thirty tons. On October 24 layed workers of underground hydro center last of 15 000 cubic meters of concrete into construction of ceiling at block number one. 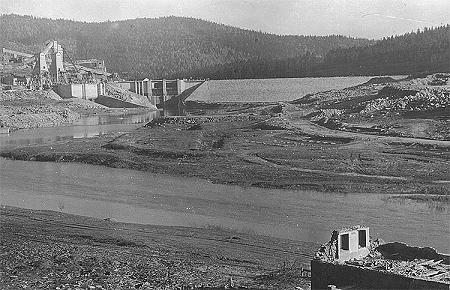 Year 1959
Finally came one of two days, which were closing the construction of Lipno: on July 15 1959 at 17.55 hours passed first test of energetic system. Blades of the first turbine moved at first and turboengine begun supplying households with first kilowatts. Water from Lipno dam flew through waste tunnel out of its original riverbed. Second turbine was brought to working on December 7 1959 and it supplied current as reliable as the first one.