The Abri (a cave with the craggy overhang) is located in the south of Dobrkovice, just next to the road to Kájov and nearby the house No. 207. The vertical limestone wall contains numerous cracks and ravines, they became hollows thanks to the impact of rain water. Bigger hollows close to the house were built up by a little wall and used as a cellar. On the western part the hollows are untouched until now. The entrance of the cave is protected by a roof-shaped overhanging that probably used to overlap more than now. It fell down after a certain time. Its fragments were detected in front of the cave, under the sediments of sand and mud.

Mr Janoušek, that time an owner of the house, tried to excavate under the rock a hole for lime in the year 1933. In course of his work, he had a chance to discover large bones. They attracted his attention. Mr Janoušek announced his unusual finding to Karel Brdlik, an amateur archaeologist, who together with doctor Leonard Franz and professor Liebus commenced the systematic research. A smaller amount of instruments made out of bone and horn-stone and a rich collection of fossils of prehistoric animals were excavated. The archaeological finds were piled up to the depth of 1.60 metres. 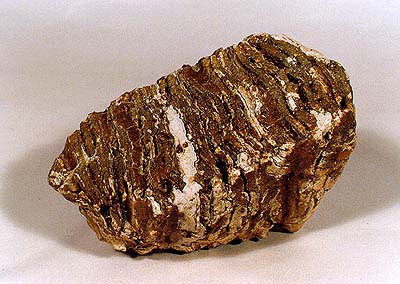 On the eastern part of the location there was a thin stratum of mud and clay, resting on a sand bench, divided by a limestone slate. A comparatively big stratum of ashes with the rests of charcoal laid on the sand. The second stratum of ashes could be only proved after the remove of a clay stratum also on the craggy step opposite the rock. The traces after fire-burns were here irrefutably manifested and even the sand under the clay was roasted hard. In the clay and the stratum of ashes there were detected fragments of fossils. They laid partly on a stone bench wedged into a crag and calcified in course of time, and they were partly detected on a sand stratum. The fossils did not have any classification. The bones of beasts of prey and hoofed animals were mixed in different positions. They supposedly were from one period of time.

The variety of the fossils' composition in Dobrkovice was determined by specialists of the National Museum in Praha, based on the comparison with their collections of Paleontological findings. Upon their judgement, there were found the fragments of the following animals, beasts of prey: cave hyena, few kinds of cave wolf, central European and polar fox, cave lion and particularly cave bear with his well-preserved huge skull. There were also the hoofed animal parts: rhinoceros of the quaternary period, mammoth, three kinds of horses, Primeval bison, giant deer, northern reindeer, and then the group of rodents with a polar hare and lemming and a fowl the so-called shaggy from the birds.

A human presence, apart from the mentioned fireplace, is confirmed by the instruments made out of bones and horn-stones used probably for working the fur and for hunting. Some bone fragments of hunted animals also had traces of work: chops, cuts or burns.

As a result from the findings, there is a statement that the Dobrkovická cave was likely temporally inhabited by a group of hunters (Homo Sapiens Sapiens type) from 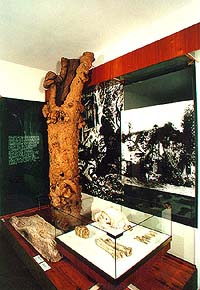 the Early Palaeolithic period. Some scientists use the name of Homo Sapiens Fossils, but just for few of the first finding of that kind (Lartet, 1869). The anthropologists reached the opinion that the determined differences did not step over the frame of Homo Sapiens Sapiens type, to which a modern human being belongs.

Hunters from Dobrkovická cave are possibly classified as the so-called Aurignac culture (the name comes from the French prehistoric site Aurignac, sometimes used as aurignacien) dated approximately from 70 to 30 thousand years before Christ. The characteristic of the culture is the finer and more accurate work of stone instruments made of, for example: the already mentioned horn-stone, flints, quartz, crystal, obsidian etc., and the first usage of instruments made out of bones, flints and mammoth's tusks. It concerns, for example: various types of knifes, scrapers, tips etc. In the Early Palaeolithic period we meet for the first time the prehistoric art represented by little statues, engraving and paintings on the cave's walls.

From the other finds in South Bohemia, which belong to the Aurignac culture, we can name the discovery of fragments of a tent-type cottage at the foot of Svatobor in Sušice, indicated as a workshop for stone instrument production, and a horn-stone tip of a spear detected in a little cave nearby the Třísov village in the Český Krumlov region.

Part of archaeological discoveries is presented to public in expositions of District Museum of National History in Český Krumlov and South Bohemia Museum in České Budějovice.