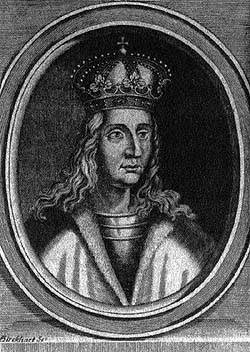 An unstable and unpleasant situation in Bohemia at the end of the 14th century led to open conflict between king Václav IV. and the union of feudals. In 1394 they captured Václav IV. in Králův Dvůr by Beroun, then, led by Heinrich III. von Rosenberg, carried the king to Upper Austria to the Strahemberg castle Wildberg. Václav IV. spent some of this journey at the Český Krumlov castle. It has been said for a long time that king Václav IV. was kept in Český Krumlov in the thus-called Václav´s cellars in the 4th castle courtyard (see IVth Courtyard of Český Krumlov Castle), but these sayings are unwarranted. The king, unless he was a prisoner, probably stayed very well guarded in the residential rooms of the castle. In a similar fashion, Václav IV. visited the Český Krumlov castle once again in 1402 when the whole situation was repeated. The king was captured in the royal house in Staré Město in Prague and carried to the Schaumburg castle in Upper Austria. This journey as well led through Český Krumlov, still ruled by Heinrich III. von Rosenberg.