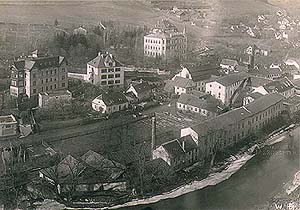 Ignác Spiro was born into a nonwealthy Jewish family and reached his future post only through his own diligence. When he was a child he and his brother Jakub had to earn money to help feed the family by collecting and selling old clothes in a paper mill. Both brothers took advantage of the situation and founded a junkyard in Červená Řečice. Ignác later left the junkyard to his brother Jakub and bought a paper mill in Český Krumlov. Later he acquired Pečkovský mill and reconstructed it into the paper mill (see Paper Mill Jihočeské papírny, a.s., Větřní) in Větřní which focused on the production of wrapping paper and newsprint. He built a villa on a border of Český Krumlov for his family in 1893 (Plešivec No. 286). Ignác Spiro, together with Arnošt Porák, is credited with the development of the region\'s employment rate.