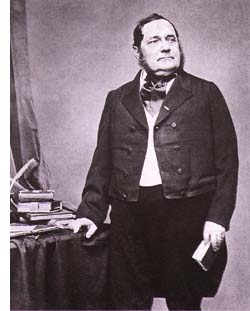 He was born in Horní Planá to a weaver\'s family. He studied on the monastery gymnasium in Kremsmünsteru (1818 - 1826), studied law and natural science on the Vienna university (1826 - 1830), then worked in the literary salons of the Schwarzenbergs and Metternichs. From 1848 he lived in Linz where he is credited with reform of primary schools and maintenance of cultural monuments. Stifter´s literary works were very much influenced by his relation to the Šumava Hills were he was born, to the life of their people and history - a novel called "Vítek", short stories called "A Small Village on Barren Land", "A Deep Forest", "Granite", "A Forest Wanderer", A Used-up Fir", and "From a Chronicle of our Family". Painting works of his were in Biedermeier style (A View onto Horní Planá, Frymburk, The Ruins of Vítkův Hrádek) with elements of the early impressionism (Čertova stěna, A Study of Stones and Clouds).