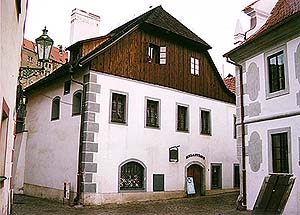 Description of the Building:
A one-storey corner building with a saddle roof and a spherical hip. The half-gable is shuttered, the front is without articulation. The floor plan of the ground floor is irregular. There are several vaulted rooms there. On the upper floor there are rooms with flat ceilings.

Architectural and Historical Development:
The house is of medieval origin. To the 1880s there was a town gate in its neighbourhood (see History of Gates and Fortification in the Town of Český Krumlov). A part of the curbed wall with a pyramid conduiting composition in the rear elevation originated in the Middle Ages. There were some reconstructions carried out in the Rennaissance and Classical periods. In 1990 a radical reconstruction was finished, during which historical architectural features of the house were removed, yard extentions were also removed, the bottom part of the street front was changed and a plastered gable was replaced by a wooden one.


History of the House Residents:
At the beginning of the 16th century a furrier Matěj is documented as the owner of the house. A furrier Řehoř owned it until 1545. A cooper Valentin Perger stayed there until 1600. The following owners were Hans and later Matyáš Stokinger in 1617. In 1629 Klement Streintz bought the house and his family lived there until 1705. From 1663 a tanner Kristián Streintz , who offered his service to the Krumlov court, stayed there. In the years 1705 - 1744 Tomáš Mohelnický lived there, followed by Jan Handschuh. In 1750 a shoemaker Lukáš Hinek moved there. The house belonged to the Tragaus in the years1781 - 1806, followed by the Herrers, who owned it to at least the 1840s. 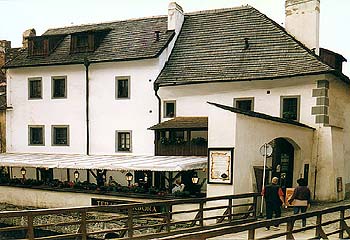